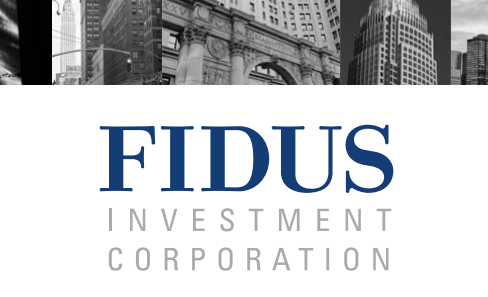 This update discusses Fidus Investments (FDUS) which has provided investors with higher returns supported by equity investments. FDUS has maintained NAV per share performance and realized gains relative to most BDCs with equity investments in over 87% of its portfolio companies which is primarily responsible for NAV growth and dividend income to support supplemental/special dividends paid over the last 8 years. 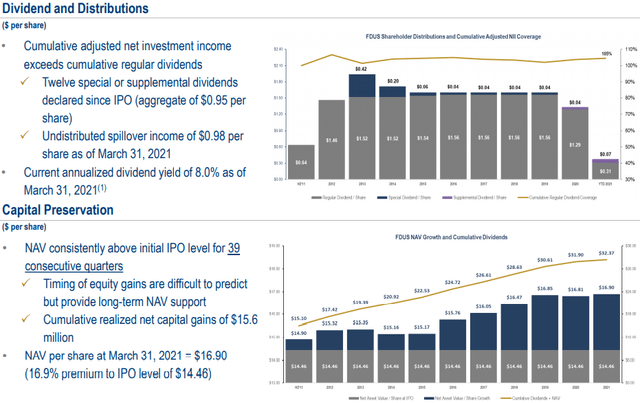 As predicted in previous reports, FDUS slightly increased its regular dividend in February 2021 and recently announced a dividend strategy that includes an easily sustainable regular dividend as well as a variable portion to pay out the excess earnings as needed (similar to TSLX, HTGC and CGBD) and was discussed on the call:

“The Board has devised a formula to calculate the supplemental dividend each quarter, under which 50% of the surplus and adjusted NII over the base dividend from the prior quarter is distributed to shareholders. For the second quarter, the surplus is $0.15 per share. Therefore, on May 03, 2021, the Board declared a base quarterly dividend of $0.31 per share, and a supplemental quarterly cash dividend of $0.08 per share.”

From previous call: “As a result of the steady improvement in the overall health of the portfolio since then, the Board has increased the base quarterly dividend by $0.01 to $0.31 per share and implemented a supplemental quarterly dividend for 2021 equal to 50% of the surplus in adjusted NII over the base dividend for the prior quarter. Being aggressive with dividend policy just doesn’t seem like the right thing to do. We feel this approach is a good solution for at least 2021 and provide significant upside to the base dividend as we had in the last two quarters, while also providing what I would say is a durable and flexible distribution model in these uncertain times. Will this be a permanent move? It could be. I think the base dividend is something we will always look at, but the approach is a good one. And I wouldn’t say we are the first to do this. But I do think it’s a good one, especially in this environment and we will consider kind of on a permanent basis as well as we move forward, but this is a 2021 move at this point.”

Also, previous reports correctly predicted the reduction in FDUS’s quarterly dividend from $0.39 to $0.30 per share announced in May 2020. FDUS has paid supplemental dividends over the last 8 years but usually in Q4 (last 5 years) and many of them are around $0.04 as shown below. 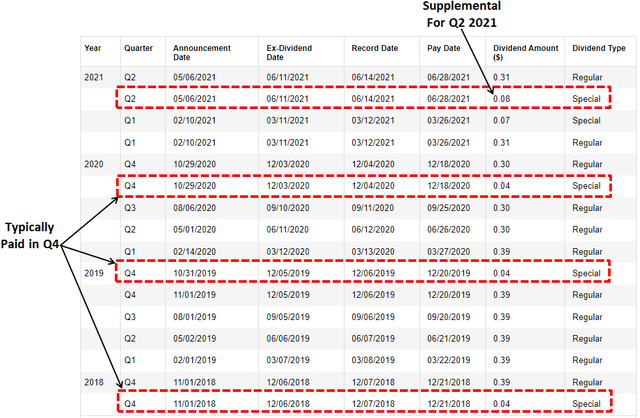 There is the potential for significant realized gains related to the exit of certain equity investments including Pfanstiehl, Inc., Pinnergy, Ltd., and Global Plasma Solutions which were among the largest markups in 2020. If these investments were sold at the fair value as of March 31, 2021, would imply potential realized gains of over $61 million or $2.51 per share which would likely drive a significant increase in supplemental dividends over the coming quarters. Also, these investments currently account for 9.1% of the portfolio fair value and could be reinvested into income-producing assets driving higher earnings and a potential increase in the regular dividend.

However, FDUS does not have a controlling interest in these companies, and management mentioned “there is no rush” to exit Pfanstiehl as the company has additional upside potential:

“We did rotate half of our investment and rotate out of it in Q1 of last year. Pfanstiehl is a manufacturer of high-purity sugars and active ingredients for injectable drugs and biologic drugs, mostly in the oncology arena, are focused on the oncology arena. They also do participate in the vaccine arena to a certain degree. I’d say the company is performing very well, and the outlook is also strong. So the positives are outweighing any potential negatives of COVID-19 at this point in time. So valuation reflects the performance of the company. And I would say, look, we’re – we like the outlook of the business. We are not in control of the company and that would require discussions with the company or sale of the business which neither of what are happening at this point, but I don’t think there is any rush.”

During Q1 2021, FDUS had net realized gains of $3.2 million or $0.13 per share due to exiting many of its equity investments including Software Technology, Rohrer, and FDS Avionics: 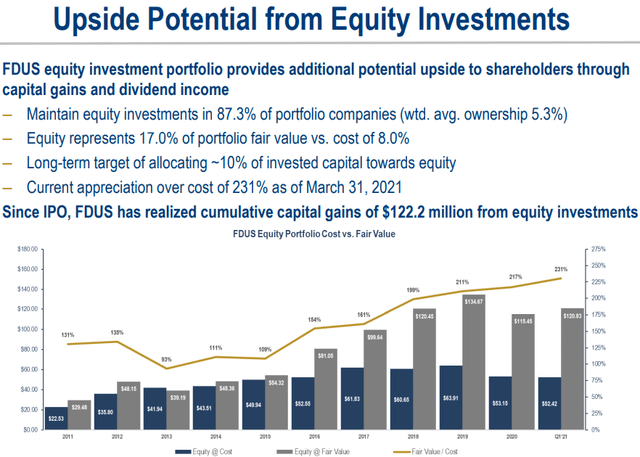 “When I look at Q2 from a fee perspective, my current expectation would be for fees to be lower. In Q1, we had about $3.1 million of fees approximately half of that was from prepayments. And so in Q2, I would expect our fees to really be driven more from origination activity and maybe to a minor extent, maybe a few amendment fees, but not the level of prepayment fees we saw in Q1. We expect Q2 to be relatively busy from origination perspective this quarter was I guess in April, we had $43 million in origination. We’re working hard on several opportunities right now. We do expect repayments to continue through the year, but at a slower pace than the recent past. Overall, we believe the portfolio is headed in the right direction and remains well structured in support of our capital preservation and income goals. Our strategy is working and we remain committed to our goal of growing net asset value over time through careful investment selection, and focus on preservation and on generating attractive risk adjusted returns.”

Also taken into account with the updated projections are the following subsequent events: 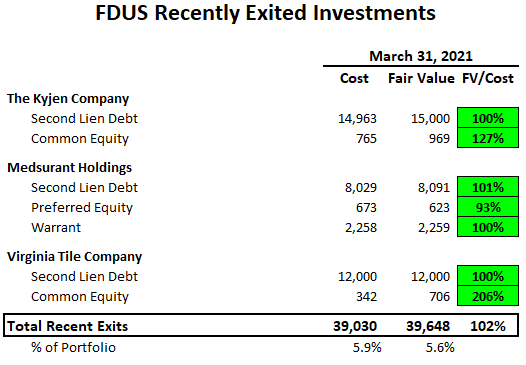 For Q1 2021, FDUS easily beat its best-case projections covering 147% of its quarterly regular dividend due to much higher-than-expected fee income resulting from an increase in prepayment and amendment fees, partially offset by a decrease in origination fees.

“I would say Q1 fee income was a little higher than normal. There were some events there that were large events, not small, that’s been obviously positive, and it’s a benefit of our model. But it’s not something that I would say is going to reoccur every quarter for sure.”

Edward Ross, Chairman and CEO: “For the first quarter, our portfolio generated strong adjusted NII, including a lift from fee income. NAV per share grew for the fourth consecutive quarter reflecting an ongoing trend of improving health of the portfolio overall since the pandemic began last year. As a result of continued high levels of M&A activity in the lower middle market, repayments were once again above historical averages and, as expected, outpaced originations.” 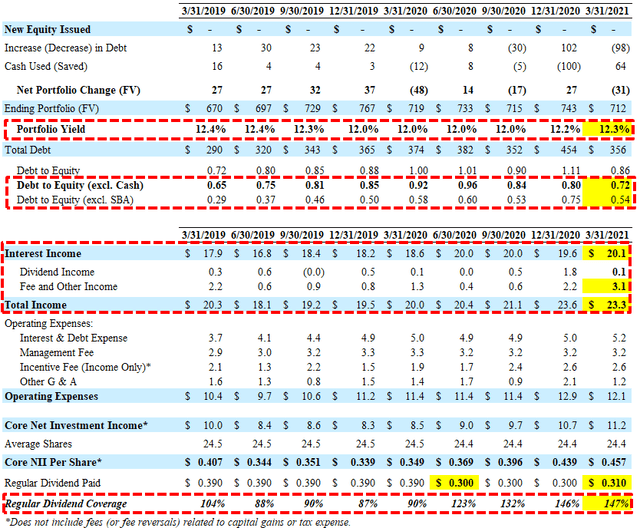 “In Q1, using the proceeds from our December bond offering, we fully redeemed our 5.875% $50 million notes due 2023 and partially redeemed $50 million of our 6% public notes due 2024. In addition, we paid down $19.2 million of SBA debentures and our second SBIC fund. We realized a one-time loss on extinguishment of debt in Q1 of approximately $2.2 million from the acceleration of unamortized deferred financing cost on the redeem bonds and SBA debentures.”

FDUSZ and FDUSG are considered ‘lower risk’ Baby Bonds due to the company having higher quality management and better-than-average historical credit performance as well as an adequate asset coverage ratio and interest expense coverage which are shown in the updated projections.

The “Bond Risk” tab in the BDC Google Sheets includes a summary of metrics used to analyze the safety of a debt position such as the “Interest Expense Coverage” ratio which is used to see how well a firm can pay the interest on outstanding debt. Also called the times-interest-earned ratio, this ratio is used by creditors and prospective lenders to assess the risk of lending capital to a firm. A higher coverage ratio is better, although the ideal ratio may vary by industry. When a company’s interest coverage ratio is only 1.5X or lower, its ability to meet interest expenses may be questionable.