Armen Panossian, CEO and CIO: “The closing of the Merger on March 19 was, of course, another highlight of the quarter. We believe the combined company will provide significant value to our shareholders. As a result of our continued strong performance and potential to improve earnings following the merger, our Board of Directors announced a fourth consecutive quarterly dividend increase to $0.13 per share, up 37% from the level one year ago. OCSL generated solid earnings results in the second quarter. Net asset value per share grew by 4%, supported by continued price appreciation on our high-quality investment portfolio. Additionally, we capitalized on the current market environment by harvesting realized gains on some of our liquid debt securities and rotating out of lower yielding investments into higher yielding, proprietary ones.”

On March 19, 2021, OCSL announced the closing of the previously discussed merger with Oaktree Strategic Income (OCSI). In connection with the merger agreement, Oaktree has agreed to waive $750,000 of base management fees payable in each of the eight quarters following the closing and is taken into account with the previous projections. As shown in the ‘best case’ projections, there is the possibility of additional increases in its quarterly dividend partially due to the merger. In connection with the merger, former OCSI stockholders will receive 1.3371 shares of OCSL for each share of OCSI based on the final exchange ratio.

“I’d like to spend a few moments discussing the closing of the merger with OCSI, which occurred on March 19. As we have emphasized previously, we believe that this transaction has resulted in several benefits to OCSL, including a larger, more scaled BDC with $2.3 billion of assets, up from $1.7 billion in the prior quarter. And improvement in portfolio diversity, including the increase in first lien loans to 68% of the portfolio at fair value from 60%, increased trading liquidity. And we also expect the merger to be accretive to NII over both the near and long-term through cost savings and the two-year fee waiver. In addition, part of our rationale for the merger was improved access to more diverse, lower-cost funding sources.”

I am expecting continued improvement in earnings over the coming quarters through the use of higher leverage, continued rotation into higher yield investments, accretive impacts from the merger including fee waivers as well as higher returns from its Kemper and Glick joint ventures.

“The Kemper joint venture had $352 million of assets invested in senior secured loans to 57 companies, this compared to $341 million of total assets invested in 56 companies last quarter. Assets increased quarter-over-quarter, mainly due to the increase in the market value of its investments and net portfolio growth as purchases exceeded sales and repayments. As a result of the underlying portfolio depreciation, OCS sales investment and the JV were written up by $5 million or 4% from the prior quarter. Leverage at the JV was 1.3 times at quarter end, up slightly from 1.2 times in the December quarter. Given the strong balance sheet and earnings power at the Kemper JV, we anticipate that we will begin to receive quarterly dividends starting next quarter. Regarding the Glick joint venture, it had $137 million of assets at March 31. These consisted of senior secured loans to 36 companies. Leverage at the JV was 1.2 times at March 31. OCSL subordinated note in the Glick joint venture, totaling $55 million is current, and we expect to receive ongoing payments, consisting of coupon interest and principal repayments of $1.3 million per quarter on a run rate basis going forward.”

On May 11, 2021, OCSL announced that it had priced $350 million of 2.700% of unsecured notes due January 15, 2027, which has been taken into account with the updated projections. OCSL had growth capital available given its historically low leverage with a debt-to-equity ratio of 0.84 as of March 31, 2021. On May 4, 2021, the company amended its Syndicated Credit Facility increasing the size to $950 million used to repay borrowings under its higher cost Deutsche Bank Facility from OCSI:

“We amended our syndicated credit facility, increasing the size to $950 million from $800 million and extending maturity by 2 years to 2026. We also retired a higher cost credit facility that was acquired from OCSI. While there are still some more to be done, we believe these actions position us well to optimally fund investments and will help reduce our overall cost of debt capital. Overall, we are very pleased with the quarter.” 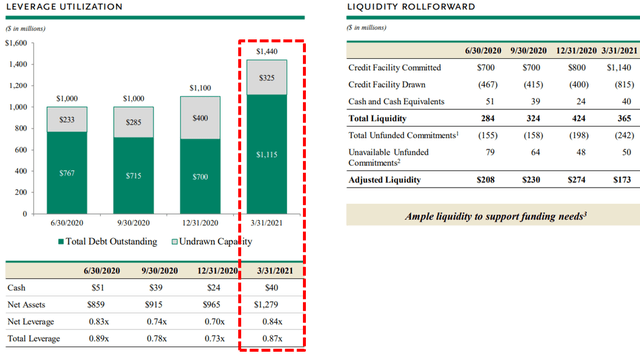 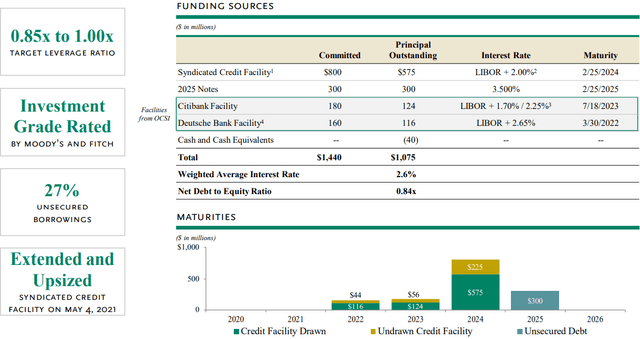 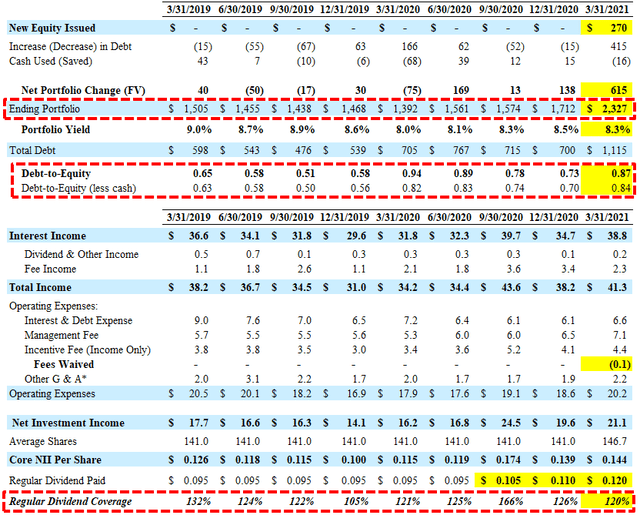 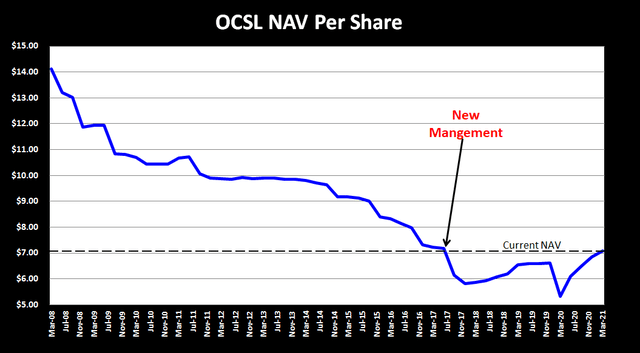