As mentioned in my previous article discussing FSIC, “3 Largest Business Development Companies Take Steps To Increase Returns To Shareholders“, the company was previously seeking to reduce its asset coverage ratio but reconsidered after the S&P weighed in:

“On April 12, 2018, the board of directors (the “Board”) of FS Investment Corporation (the “Company”), as a result of new industry guidelines set forth by Standard & Poor’s on April 3, 2018, determined to no longer modify, beginning March 29, 2019 (one year from prior Board determination), the asset coverage requirement for senior securities applicable to the Company under Section 61(a)(2) of the Investment Company Act of 1940, as amended by the Small Business Credit Availability Act. As a result, the Company’s asset coverage requirement for senior securities remains and is expected to remain at 200% instead of 150%.”

As mentioned in previous articles, I sold 50% of my position in FSIC at around $10 in late 2016 due to the anticipated dividend cut that was announced in August 2017. FSIC is currently my smallest BDC position, and I will not be purchasing additional shares until after the company reports Q2 2018 results in August, as I will be looking for signs of maintaining its portfolio credit quality. One of my primary concerns is the number of investments that “require close monitoring” has increased from 6% to 21% of the portfolio over the past two quarters.

As shown below, FSIC stock price has declined significantly since 2016 likely due to the dividend cut and potential upcoming credit issues. 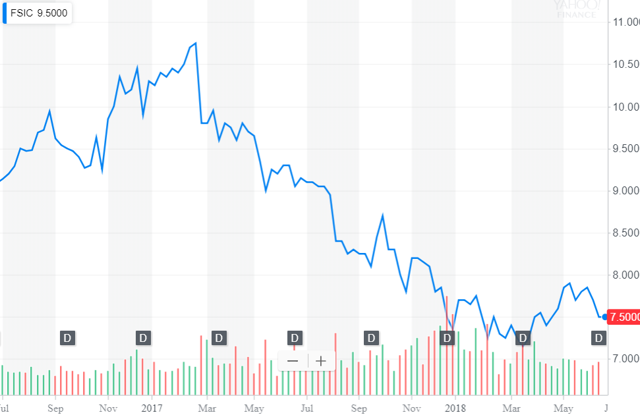 As mentioned earlier, I am concerned about the amount of investments that “require close monitoring” increasing from 6% to 21% of the portfolio over the last two quarters. Also, 1% of portfolio investments rated “5”, implying “underperforming investment with expected loss of interest and some principal.

For the quarter ended March 31, 2018, net asset value (“NAV”) per share declined by around 1.5% due to a markdown in its first-lien position in Safariland LLC and markdowns in equity positions for JW Aluminum, PSAV Aluminum Co., Advanced Lighting Technologies, Safariland LLC, andMood Media.

“NAV per share declined from $9.30 per share as of December 31, 2017 to $9.16 per share as of March 31, 2018. Driven primarily by unrealized losses attributed to certain equity position and one loan position which we believe we will ultimately realize the full value of our investment.” 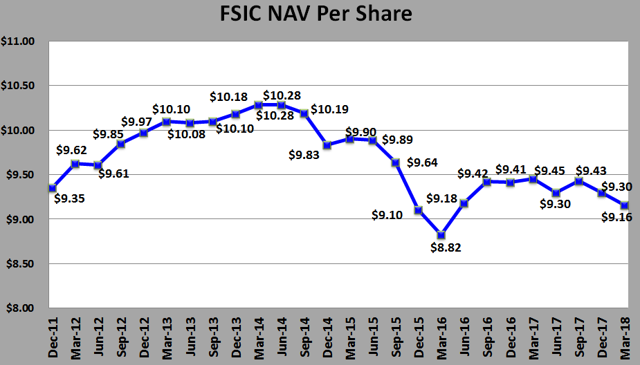