I recently purchased additional shares of New Mountain Finance (NMFC) along with various insiders as shown in the following chart and table below: 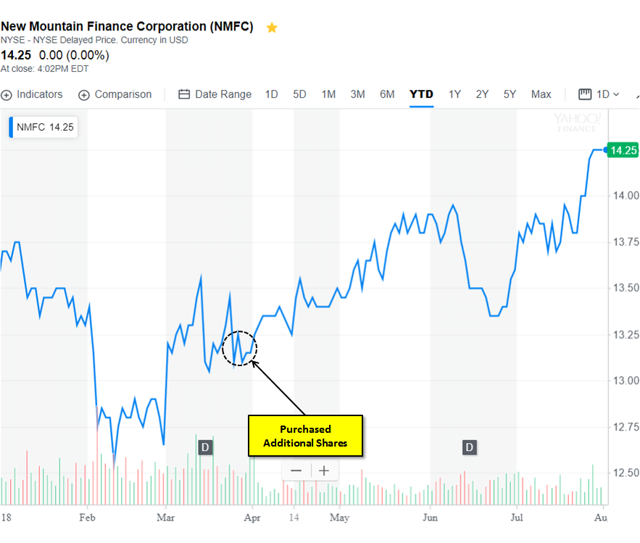 On June 8, 2018, NMFC held a special meeting and shareholders approved the company becoming subject to a minimum asset coverage ratio of 150%, permitting NMFC to double its leverage based on the following votes:

As a result of the stockholder approval, effective June 9, 2018, the asset coverage ratio under the 1940 Act applicable to NMFC was decreased from 200% to 150%, permitting NMFC to incur additional leverage.

We believe the modified asset coverage requirement will give us another powerful tool to enable us to earn our dividend in the safest possible manner,” said Robert Hamwee, Chief Executive Officer of NMFC. “We will continue to stay focused on defensive growth companies, but with the passing of this proposal, we would expand our ability to invest in a wider range of positions in the capital structure of those companies.”

John Kline, President and Chief Operating Officer of NMFC added, “If this proposal passes, we expect our investment mix to shift somewhat towards more senior assets. Coupled with the current fee waiver mechanics that we have had in place regarding management fees paid on these senior assets, we expect that the overall management fee percentage would be lower, on average.”

Management continues to waive a portion of its 1.75% base management fee for a current effective rate of 1.46% that will likely be lower over the coming quarters. This is due to new investments mostly consisting of “senior assets” at lower rates as discussed recently by management:

As incremental assets added through increased leverage will be predominately senior, the management fee burden on these assets will be significantly less than our headline 1.75%. Specifically, as discussed many times over the years, on senior assets we charge a management fee only on the implied equity utilized to purchase those assets, which in most cases range from 30% to 50%, therefore we would expect management fees on the vast majority of these incremental assets to generally range from 60 to 80 basis points.”

Due to the recent portfolio growth, the company was at the higher end of its target leverage as discussed and shown below.

As of March 31 our statutory debt to equity ratio was 0.81 at the high end our target range. Slide 24, we show historical leverage ratios which are broadly consistent with our current target statutory leverage of between 0.7 and 0.81.”

Q. “Leverage is probably about as high as its been in the BDC. I am just kind of curious, is that an anticipation for the increased leverage that you guys have done. I think the shareholder vote in June or is that more just kind of a timing issue on the strong originations for the quarter?”

A. “Yeah, it’s really more of a timing issue. You know the – I mean we didn’t – I don’t think we found out about the change in legislation from late March and you know a lot of it will be too late to influence our behavior in terms of you know what would have been closed by the end of March. So it’s really more idiosyncratic around timing of originations and repayments. You know obviously as we navigate this quarter you know depending on how the process goes around the proxy, that may have an influence on exactly where we wind up at 6/30.”

Previously, I was expecting an equity offering in Q3 2018 which is likely not needed given the recent shareholder vote.