The following is a quick update that was previously provided to subscribers of Premium Reports on August  8, 2018. For target prices, dividend coverage and risk profile rankings, credit issues, earnings/dividend projections, quality of management, fee agreements, and my personal positions on all BDCs  (including this one) please see Deep Dive Reports.

PennantPark Floating Rate Capital (PFLT) reported between my base and best case projections covering 98% of its dividend and was not expected to fully cover due to being underleveraged. However, there was higher-than-expected portfolio growth and an increase in its portfolio yield (as predicted in the previous report) driving interest income to its highest level as shown below and likely adequate dividend coverage over the coming quarters. I am expecting the company to slowly increase its leverage and eventually utilize its Board approved reduced asset coverage ratio, effective as of April 5, 2019.

“Due to the activity level year to date as well as this quarter, the increase in LIBOR and the growth of PSSL, we are pleased that our current run rate net investment income covers our dividend,” said Arthur H. Penn, Chairman and CEO. “Our earnings stream should have a nice tailwind based on a continuation of these factors. Adding people to our platform has resulted in a significantly enhanced deal flow which puts us in a position to be both more active and selective.” 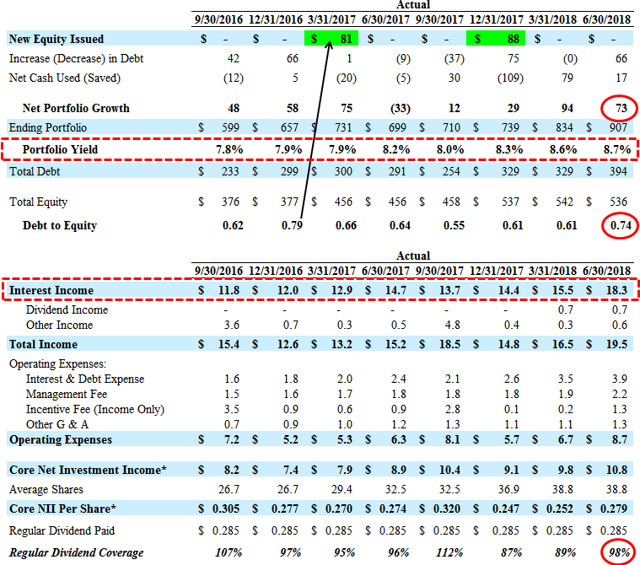 Also, there was previously around $0.45 per share of spillover to cover dividend shortfalls:

“We have significant spillover income that we can use as cushion to protect our dividend while we ramp the portfolio. As of September 30, our spillover was $0.45 per share.”

There was another increase in its overall portfolio yield (from 8.6% to 8.7%).

As discussed in my previous reports, PFLT’s portfolio yield has started to increase partially due to additional returns from the PennantPark Senior Secured Loan Fund (“PSSL”) and I am expecting higher portfolio yield and dividend coverage in the upcoming quarters. In May 2018, the company doubled the capacity of the PSSL to a total of $630 million.

As of June 30, 2018, there were no investments on non-accrual status as Sunshine Oilsands Ltd. (previously on non-accrual) was exited and primarily responsible for realized losses of around $1.8 million during the quarter. Net asset value (“NAV”) per share decreased by 1.1% (from $13.98 to $13.82) due to markdowns in various investments including LifeCare Holdings, Quick Weight Loss Centers, Affinion Group Holdings, Chicken Soup for the Soul Publishing, and GCOM as well as restructuring its investment in New Trident HoldCorp, Inc. 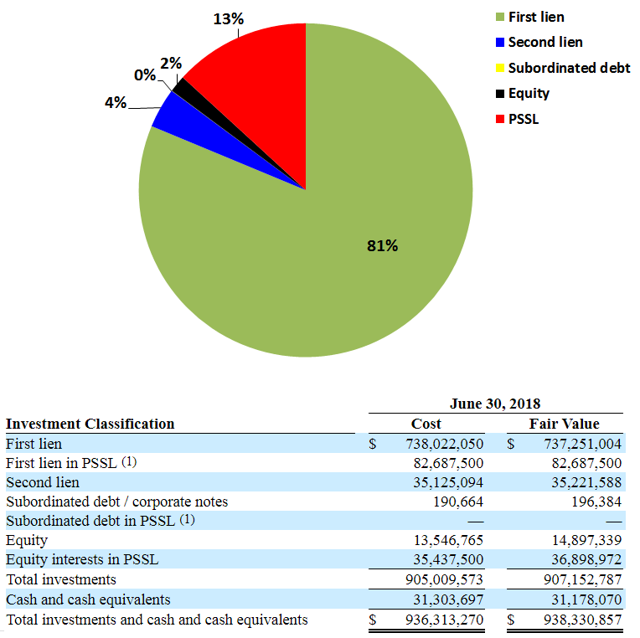 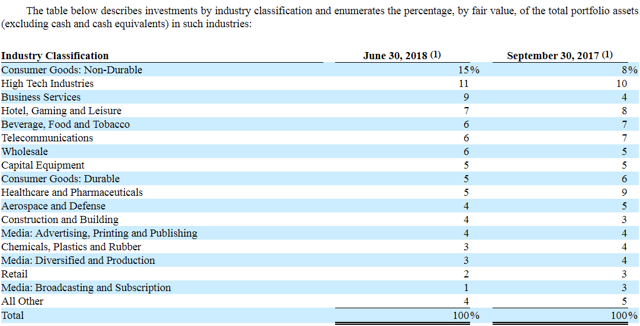