As mentioned at the bottom of each of my articles, to be a successful BDC investor:

This is a good example of why you need to diversify your BDC holdings.

On March 12, 2019, federal authorities arrested dozens of people involved in the largest college admissions fraud scam in U.S. history. Prosecutors have named 33 parents (including Manuel Henriquez, Chairman and CEO of HTGC) and 13 coaches but said the investigation continues and more parents and coaches could be charged.

Federal prosecutors allege that Mr. Henriquez, along with his wife, participated in the cheating scheme on four occasions for their two daughters and were charged with conspiracy to commit mail and wire fraud. Mr. Henriquez surrendered to the FBI on Tuesday and was released on a $500,000 bond following a court appearance.

Mr. Henriquez will continue as a member of the Company’s Board and an adviser to the Company.

Mr. Bluestein has nearly 20 years of financial services, direct investment and credit experience. He joined the Company in 2010 as Chief Credit Officer and was appointed Chief Investment Officer in 2014. Before joining Hercules, Mr. Bluestein served as Founder and Partner of Century Tree Capital Management, a fund established to make senior secured debt investments with warrants and equity co-investments in small and micro-cap public and private companies.

Mr. Badavas stated, “The Company has a strong and deep management and investment team and a preeminent position as a provider of financing for innovative, venture backed companies. We are fortunate that Hercules has Scott, who leads our investment and origination team and was previously our Chief Credit Officer, to assume the role of Interim Chief Executive Officer. Scott has deep knowledge of our investments and has played a key role in defining our underwriting strategies. We are confident that our market leading role in providing financial solutions to innovators and their venture capital partners will continue uninterrupted.”

As mentioned in previous articles and the BDC Risk Profiles, the ‘Quality of Management’ is likely the most important part of BDC analysis as management is responsible for building a portfolio to deliver returns to shareholders while protecting the capital invested. BDC management controls all the levers including the quality of the origination/credit platform, managing the capital structure with appropriate leverage, meaningful share repurchases, accretive equity offerings and dividend policy, creating an efficient operating cost structure and willingness to “do the right thing” by waiving management fees or having a best in class fee structure that protects returns to shareholders.

Also mentioned in previous public HTGC articles, including “Hercules Capital: External Management Analysis”, in May 2017 Mr. Henriquez attempted “externalization” which would have increased the overall cost structure as well as making it less scalable for future dividend increases. This likely has weighed on the stock (for fear of another attempt to externalize) and shareholder’s trust in management.

The recent events did not appear to have any relation to activities at the company but will be a distraction for HTGC management and will likely impact the near term stock price. I have taken into account lower expected portfolio growth starting in Q2 2019 as well as lower core portfolio yields. However, HTGC had a $1.5 billion pipeline of potential opportunities and had been actively hiring additional personnel driving higher operating expenses in 2018. Please see the discussions below.

From recent earnings call: Now, let me take a brief opportunity to discuss our views of the marketplace and activities as we enter the first quarter 2019. We remain very optimistic about what we’re seeing so far in Q1 of 2019. As we continue to be hyperly selective in evaluating and reviewing the potential pipeline that now stands at over $1.5 billion of new investment opportunities that we’re evaluating. This is above and beyond the already $345 billion of close or pending to close commitments that we already have in-house today as outlined in our earnings release this afternoon.

From a previous call: In an effort to address the increasing loan demand, we’re actively expanding our offices in Boston and Palo Alto. We’re adding additional new headcounts across all levels of the company, which we expect to continue throughout the remainder 2018 and early part of 2019. We see tremendous opportunities continue to grow our loan portfolio rolling into 2019 and we want to make sure that we’re properly capitalized as well as staffed to continue to address the strong demand that we are seeing for our capital.

As many readers know, I am typically a ‘Buy and Hold’ investor making additional purchases during general market/sector pullbacks and only selling if there are serious issues. I have been investing (on and off) in HTGC over the last 10 years and writing public articles on Seeking Alpha discussing the stock for over 6 years.

Previously, I sold my shares of HTGC at an average price of $15.17 on May 4, 2017, due to the company seeking “externalization”. However, I have been slowly repurchasing shares including most recently on December 26, 2018, at $10.95. As shown below, HTGC’s stock price never recovered from its pre-externalization highs likely for the reasons discussed earlier. 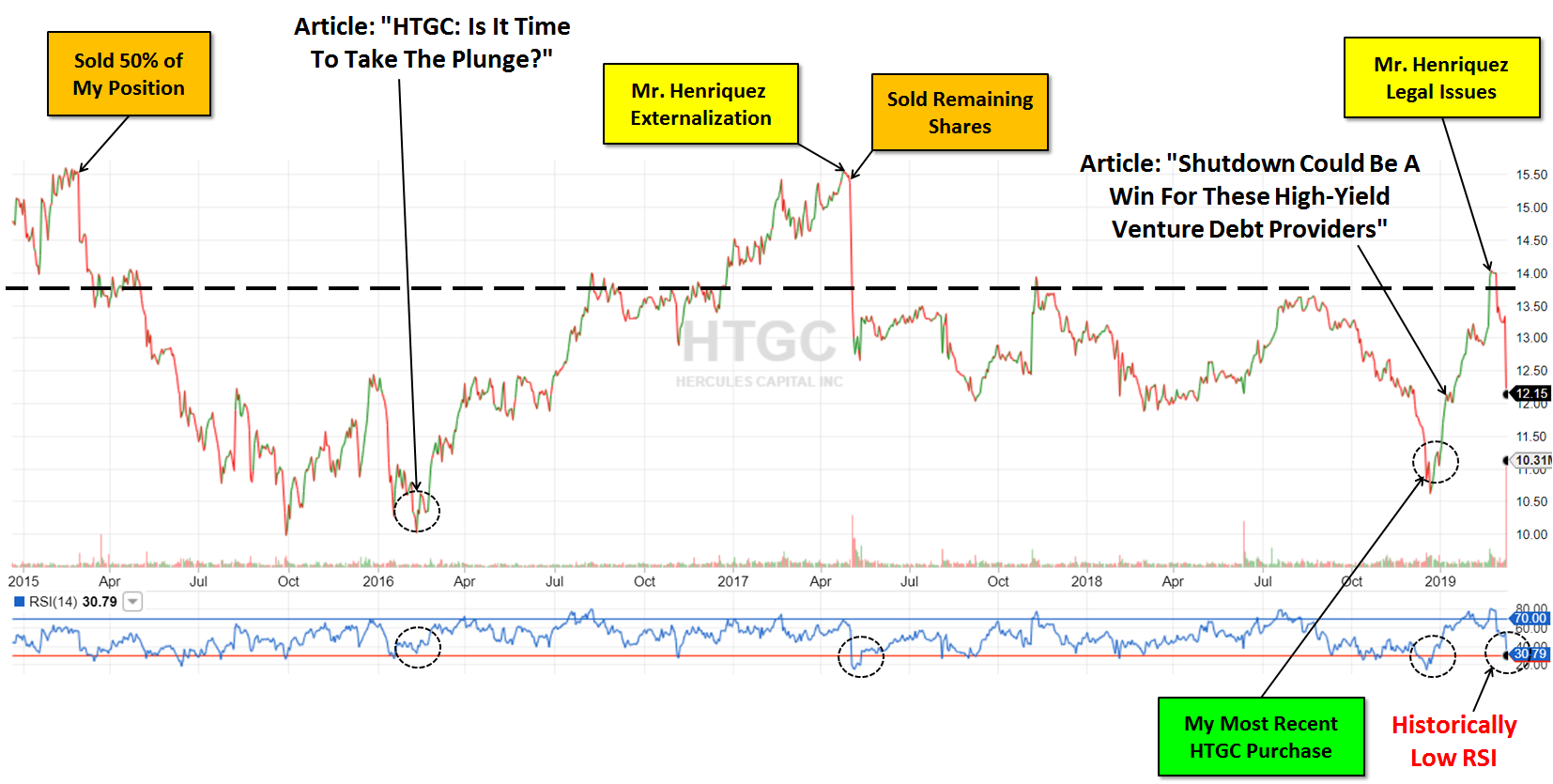 I also own shares in another internally managed BDCs, Main Street Capital (MAIN), which is one of the best-managed companies in the sector as discussed last month in “Dividend Increases For The High-Yield BDC Sector Part 4“. Shortly after the HTGC externalization announcement, MAIN’s management was asked if they would ever seek to be externally managed and Vince Foster (the CEO at the time) responded with:

Yeah. If I went to the Board and expressed an intent to externalize, I would — I think I would become externalized, I expect to be terminated. And if the Board let me, I would hope that the shareholders would terminate them.

I sold my shares in May 2017 because the externalization was a bad deal for the company and shareholders but excellent for Mr. Henriquez and fully supported by the Board. My previous articles discussed why I thought it was a ‘bad deal’ including:

It should be noted that Mr. Henriquez has around 2 million shares currently valued at almost $25 million which is much more than the interim CEO and Board of Directors as shown below. 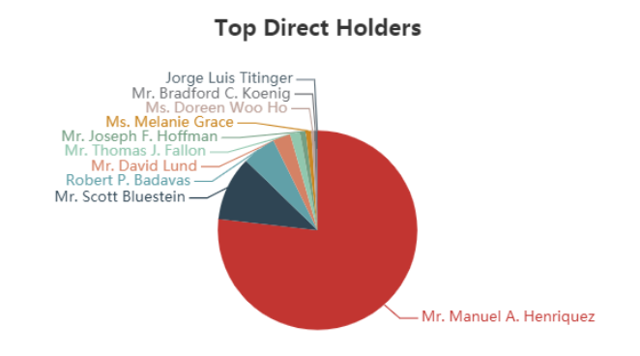 What Can The Board Do From Here?

The following is from the Retention Agreement, dated as of October 26, 2017, between Hercules Capital, Inc. and Manuel A. Henriquez:

If anyone has any doubt of whether Mr. Henriquez will be found guilty “of any felony or a misdemeanor involving moral turpitude”, please read the charging documents including pages 44 through 57:

The following is from “How Silicon Valley became epicenter of college-entry cheating scandal“:

The Henriquezes of Atherton, however, seemed to have few qualms of drawing in their daughters’ participation. In 2015, after paying upward of $25,000 to arrange for a proctor to sit next to one of their daughters during her SAT exam at a private Belmont high school and feed her the answers, the young man “gloated with” Elizabeth Henriquez and her daughter “about the fact that they had cheated and gotten away with it,” according to the indictment.

Clearly, Manny (Mr. Henriquez) is still important to the company and needed for the transition as he is very influential in the VC community. But it would be nice if the Board would do the right thing this time for shareholders including adjusting/canceling current and future stock option awards or even a potential clawback of shares and restricted stock units.