TriplePoint Venture Growth (TPVG) reported between its base and best case projections covering 111% of its dividend due to prepayment-related income (similar to the previous quarters) driving an effective yield of 16.5% as shown in the following chart.

“The first quarter marked the fifth anniversary of our initial public offering. Our brand, reputation, focus on venture growth stage companies and our track record continue to differentiate us in the market,” said Jim Labe, Chairman and Chief Executive Officer of TPVG. “We are pleased to grow our platform and our investment portfolio while delivering attractive returns to our stockholders.” 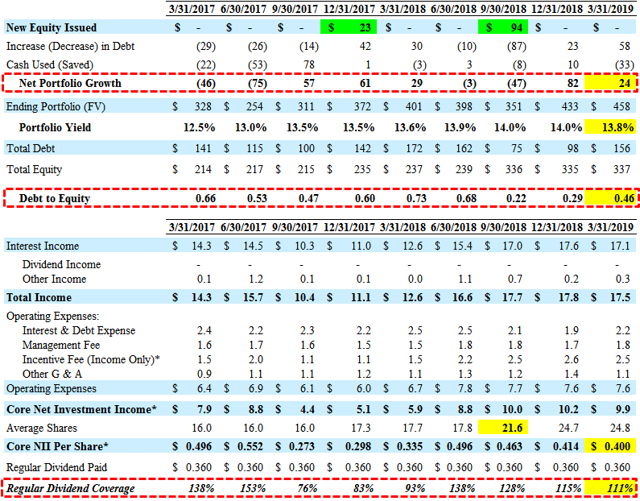 “The mark-to-market increase was primarily due to price appreciation in our publicly traded equity holdings in Farfetch Limited and was somewhat offset by reversals in unrealized gains associated with loans that had been marked up due to pending acquisitions or anticipated prepayments.”

During Q1 2019, the company invested $92 million to 9 companies with a 13.0% weighted average yield but remains underleveraged due to the previous equity offering and $58 million of early prepayments. As of March 31, 2019, TPVG had $42 million of cash and $129 million of available capacity under its revolving credit facility for upcoming portfolio growth. In June 2018, TPVG obtained shareholder approval to reduce its asset coverage ratio to potentially increase its leverage (debt-to-equity) to a maximum of 2.00x. However, the company continues to experience early repayments and will likely remain under 1.00x.

“In general we expect and have always given guidance of one to two prepayments per quarter and it’s going to be part of our activity and part of our yields, but we always can get down to you know specific crystal ball vision next 30, 60 days necessarily. But I would say in general, there’d be a decrease if there’s not a lot of prepays.”

From previous call: “Looking back, we had at least one prepay every single quarter over the past two years and 10 in the past 12 quarters. In fact, we’ve already had two here in 2019. We expect to see that pattern of one on average per quarter in 2019, and along with our expected originations and increased leverage, is something our board is taking into consideration as we consider possible increases in our dividend policy on a go-forward basis.”

“In the guidance that we gave when we got shareholder approval on our expectation for target leverage, right, we don’t need to lever the business out more than 1 to 1, given the return profile of our assets. But having said that, we did say that, during periods where portfolio growth in between capital raises to optimize when we raise equity, we would expect to go north of 1 to 1 to take advantage of that in building the portfolio and then waiting for prepays and for the capital markets to cooperate.”

As discussed in previous reports, TPVG has historically had portfolio concentration risk and management is actively working to diversify the portfolio using the ability to co-invest across the broader platform and likely one of the reasons for the previous equity offering. The top five positions currently account for around 37% of the portfolio compared to 30% in December 2018 but down from 57% in early 2018.

Since March 31, 2019, TPVG closed $17 million of additional debt commitments and funded $40 million. On the recent call management was asked about repayments so far in Q2:

A. “No repayments. That was – it should have been in the PR or it is in the earnings with case of a yes, no repayments as or prepaying, sorry.”

Management seems confident in the ability to grow the portfolio given the current pipeline and unfunded commitments.

“To be clear, while our pipeline is quite large and our investment portfolio is growing there has been no change to our underwriting approach which we have built over the 20 years that Jim and I have worked together. I think we also want to take advantage of the lower asset coverage ability and to lever up the business. And so I would say we’re active at work managing them. I think we have the challenge as we talked about earlier in the prepared remarks of the overfunding of equity, I think I mentioned $3.3 billion has been raised by 16 of our portfolio companies in the past 15 months that have slightly under $200 million of unfunded commitment with us. We would – we would hope for those companies to utilize our debt. The challenge is when really good things happen, the large equity raises or acquisitions those goes – those go unutilized. So we’re actually thoughtful, mindful and vary on top of them.”

Sajal Srivastava, President and Chief Investment Officer: “Our performance last year demonstrated our portfolio’s ability to generate substantial yields and positive net realized gains, which resulted in approximately $4.6 million, or $0.19 per share, of spillover income we intend to distribute in 2019. Our origination capabilities, combined with our existing commitments to high quality companies in our portfolio, positions us for 2019 to be another year of growth.” 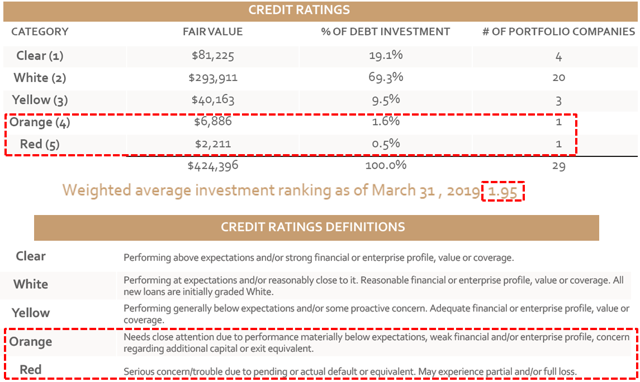 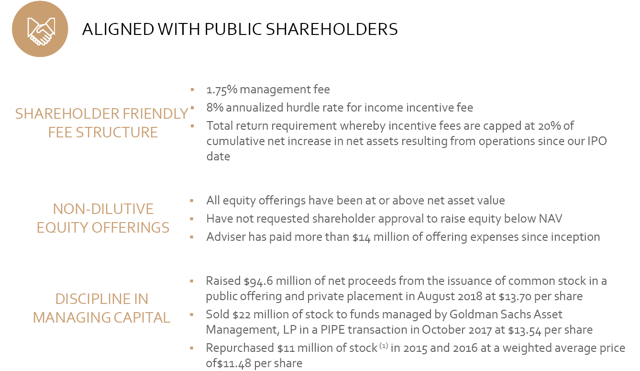