As shown below, insiders have been actively purchasing shares at prices below the current stock price between $12.05 and $12.15: 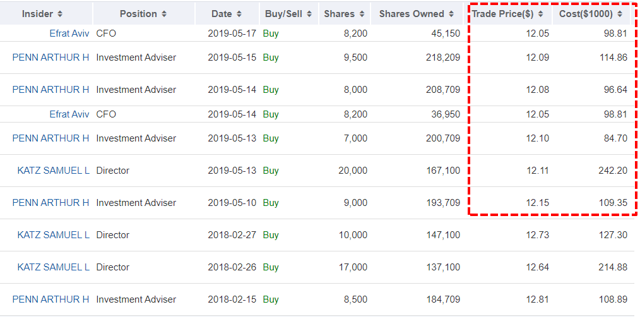 I consider the recent portfolio credit issues to be idiosyncratic (as compared to systematic) implying that they are not indicative of general underwriting issues within the portfolio. These investments have been discussed in many of the previous reports as management was clearly marking their values. PFLT remains a component in the suggested ‘Risk Averse’ portfolio due to its portfolio of mostlyhigher quality, first-lien senior secured investments at floating rates.

“As a result of our focus on high quality companies’ seniority and capital structure, floating rate assets and continuing diversification, our portfolio was constructed to withstand market and economic volatility. The cash users coverage ratio, the amount by which our EBITDA or cash flow exceeds cash interest expense continued to be healthy a 2.8 times. This provide significant cushion to support stable investment income. Additionally, at cost, the ratio of debt EBITDA on the overall portfolio was 4.3 times, another indication of prudent risk.”

PFLT’s short-term target price was previously reduced to “take into account markdowns and the possibility for New Trident HoldCorp and LifeCare Holdings to be added to non-accrual status”. Also, the previous report mentioned the markdowns for New Trident HoldCorp, Country Fresh Holdings, and American Teleconferencing Services that accounted for around $6 million (or $0.15 per share) of ‘unrealized losses’ during calendar Q4 2018 and “need close attention over the coming quarters”.

“It’s been two years since we have a non-accrual of PFLT and that run had to end at some point. As of March 31, 2019, we had four non-accruals. These names represented by 3.2% of our overall portfolio at cost and 1.5% on the market value basis. The four non-accruals along with a mark-up of our credit facility and bonds contributed to most of the NAV decline in the quarter.”

During calendar Q1 2019, New Trident HoldCorp and LifeCare Holdings were added to non-accrual status along with Quick Weight Loss Centers and Hollander Sleep Products, representing 3.2% and 1.5% of the overall portfolio on a cost and fair value basis, respectively. As mentioned above and below, PFLT has not experienced non-accruals over the last two years and “it’s unfortunate that they all happened in this one quarter”:

“Non-accrual is they stopped paying us interest. So, that’s what happened. Look, we haven’t had a non-accrual and over two years, it looks lumpy here and we’re certainly disappointed, but non-accruals are part of this business. It’s unfortunate that they all happened in this one quarter. But we normally, they’d be smoothed out overtime and we had, as you said, we already had already marked them down by and large. So, this should not have been a big surprise to people to know for them were exhibiting weakness in the past. So, as part of our business, again our track record over a long period of time PFLT now eight years is really only annualized loss of 6 basis points.”

Montreign Operating Co., Country Fresh Holdings, and American Teleconferencing Services are still considered to be performing assets but could be restructured and/or added to non-accrual status over the coming quarters.

Hollander Sleep Products and LifeCare Holdings filed for bankruptcy in May 2019 and are both working to reduce costs to improve overall profitability and/or selling assets.

If the current non-accruals were completely written off, the impact to NAV per share would be around $0.38 or 2.8%. However, management believes that these investments have been valued appropriately and with the potential for some restructurings and “getting value back for our shareholders”:

“The loans have been marked fairly by independent third-party evaluations terms. We agree with the marks and inherent in the marks gives you a sense of what we think a least value is today. We do have a really good long-term track record, working things out and getting really good recoveries overtime. We’ve, had a lot of experience, when we have to convert that equity. We’ve had a very good track record working things out, getting value back for our shareholders. In some cases, the equity security that we end up owning performed very, very well. So, the current marks are accurate, but currently may or may not reflect future value.”

During calendar Q1 2019, there was an additional markdown in its first-lien loan to Montreign Operating Company which owns and operates a resort casino in Monticello, New York. However, the company previously received $130 million of additional equity capital from its sponsor as discussed in the previous report:

“In terms of the largest investment changes, was unrealized in Montreign, I’ll point out Montreign which is the Resorts World casino up in the Catskills, which as has had a slower ramp than expected since quarter end and this was actually announced yesterday before. The sponsor has been agreed to inject more junior capital to sponsors, KT Lim, who is a global gaming entrepreneur at Malaysia. So these sponsors agreed to put in about $130 million more of equity and also that company cut a deal to do betting which it helps. So if you look at the stock of the underlying company its up quite substantially and in fact, the level of the quote on the paper is up substantially since those announcements, but Montreign was the big, at least temporarily unrealized mover in the quarter.”

Management discussed New Trident and LifeCare on the recent call:

“The two healthcare deals Trident and LifeCare have been marked down for a while. They’re both relatively small. They were on the wrong side of changes in healthcare. Those should not have been surprises and you said it was unexpected. I guess if you had no non-accruals for two years, it is unexpected to have four on one quarter. But hopefully, people understand non-accruals are part of this business. We get them from time to time and we had marked to these. The vast majority of deals already down.”

Also discussed, was Country Fresh that will be restructured at the end of June and will likely result in realized losses in calendar Q2 2019 of around $6 million or $0.16 per share but will not impact NAV unless there are additional markdowns.

Q. “As far as Country Fresh goes that was a — it’s a fairly sizable investment that had a pretty big markdown this quarter. It’s still on accrual status. Obviously, it’s still paying you guys interest income, but any sort of outlook on that investment given that is now at 66% of your cost?”

A. “You’re going to see a restructuring of that investment in this quarter end of June.”

PFLT has now had 9 out of 349 investments on non-accrual status since its IPO with a previous recovery rate of around 98%:

“Our credit quality since inception eight years ago has been excellent. Out of 349 companies in which we have invested since inception, we’ve experienced only nine non-accruals. Since inception, PFLT has made 349 investments totaling about $3 billion and an average yield of 8%. This compares to an annualized loss ratio, including both realized and unrealized losses of only about six basis points annually.”

“Although PFLT was not in existence back then, PennantPark as an organization was, and at that time was focused primarily on investing in subordinated and mezzanine debt. Prior to the onset of the global financial crisis in September 2008, we initiated investments which ultimately aggregated $480 million, again primarily in subordinated debt. During the recession, the weighted average EBITDA of those underlying portfolio companies, declined by 7.2% at the trough of the recession. This compares to the average EBITDA decline of the Bloomberg North American High Yield Index of down 42%. As a result, the IRR of those underlying investments was 8% even though they were done prior to the financial crisis and recession. We are proud of this downside case track record on primarily subordinated debt.”

“We can be extremely selective about what we ultimately invest in. We are only investing in about 2% of the deals that we have shown. We remain primarily focused on long term value and making investments that will perform well over several years and can withstand different business cycles. Our focus continues to be on companies and structures that are more defensive, have low leverage, strong covenants and high returns.” 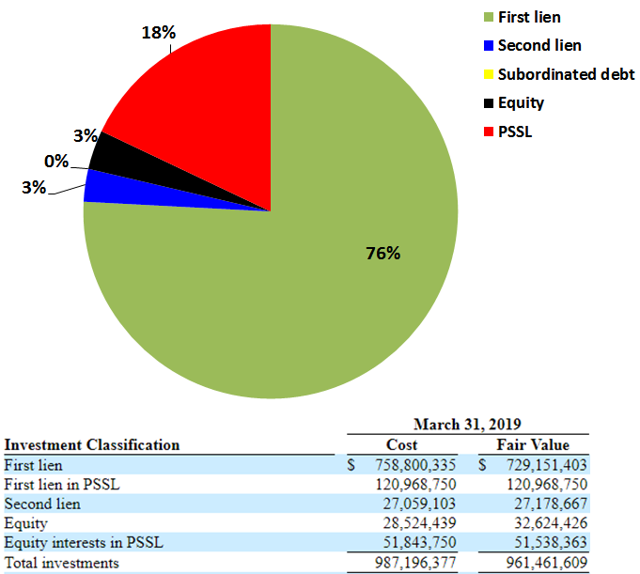