The following is from the ARCC Update that was previously provided to subscribers of Premium BDC Reports along with revised target prices, dividend coverage and risk profile rankings, potential credit issues, earnings/dividend projections, quality of management, fee agreements, and my personal positions for all business development companies (“BDCs”).

Last month, there was a notice of “3,000 more layoffs are expected in New Jersey as health care industry changes and store closings are expected to impact the state” that included Alcami Corporation which is expected to layoff 27 people on December 27, 2019. It should be noted that this investment is already included in Ares Capital (ARCC) ‘watch list’ and will be discussed in the updated Deep Dive report.

Ares Capital (ARCC) beat its base-case Q3 2019 projections mostly due to higher-than-expected portfolio growth and continued higher dividend and fee income covering its regular dividend by 123%. Its portfolio yield declined more than expected (from 9.5% to 9.0%) due to onboarding investments at lower yields. The company declared a fourth quarter dividend of $0.40 per share and confirmed the additional dividend of $0.02 per share per quarter.

Kipp deVeer, CEO: “We reported another strong quarter of core earnings well in excess of our dividend and experienced continued stable credit quality. We continue to benefit from our broad market coverage and extensive relationships which enable us to originate attractive investments and remain highly selective.” 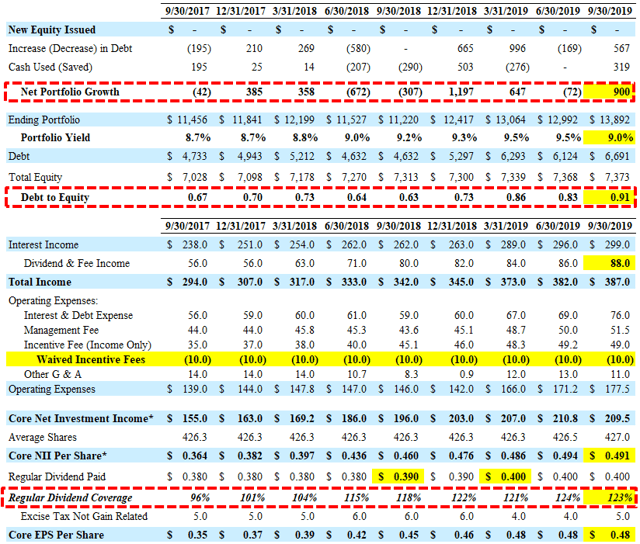 Its debt-to-equity reached its highest level increasing from 0.83 to 0.91 As mentioned in previous reports, ARCC expects to use incremental leverage to continue to invest “primarily in its current mix of investments with no fundamental change in its investment objective and intends to target a debt to equity range of 0.90x to 1.25x.” Effective June 21, 2019, Ares Capital’s asset coverage requirement applicable to senior securities was reduced from 200% to 150% and its annual base management fee was reduced from 1.5% to 1.0% on all assets financed using leverage over 1.0x debt to equity.

Its net asset value (“NAV”) per share remained mostly stable (decreased from $17.27 to $17.26) due to net unrealized/realized losses during the quarter mostly offset by overearning the dividends. ARCC experienced net realized losses of $63 million during Q3 2019 due to exiting its investment in New Trident Holdcorp that was previous its largest non-accrual investment:

Some of the largest markdowns during Q3 2019 were Ivy Hill Asset Management (same as the previous quarter), and watch list investment ADG, LLC and RC IV GEDC. 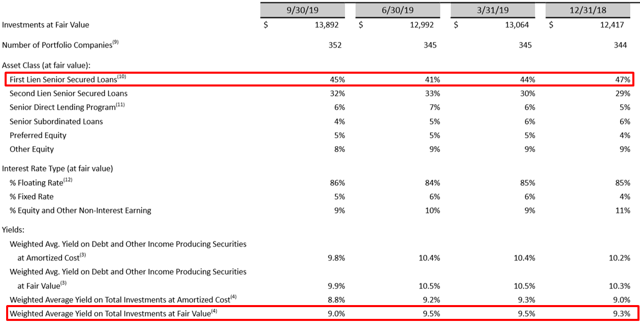 Non-accrual investments declined due to exiting New Trident Holdcorp and remain low at 0.2% fair value and 1.5% of cost with the weighted average grade of the investments in the portfolio at fair value remains around 3.0. 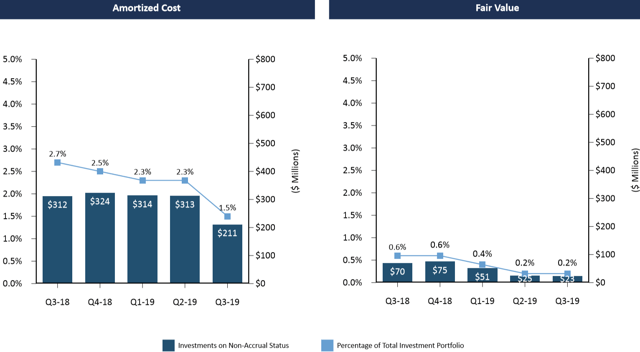 As of September 30, 2019, ARCC had $253 million in cash and cash equivalents and approximately $2.9 billion available for additional borrowings under its existing credit facilities.

Penni Roll, CFO: “In the third quarter, we further executed on our strategy of increasing and extending our sources of committed financing. After upsizing and extending the maturity of our SMBC Funding Facility, as well as successfully re-opening our 2024 notes, we ended the quarter with nearly $3 billion of available cash and undrawn committed borrowing capacity. We believe our deep liquidity position and long dated funding enhances the strength of our balance sheet and supports our ability to invest opportunistically across varying market conditions.”

From October 1, 2019 through October 24, 2019, ARCC made new investment commitments of approximately $360 million, of which $311 million were funded. Of these new commitments, 90% were in first lien senior secured loans and 10% were in second lien senior secured loans. The weighted average yield of debt and other income producing securities funded during the period at amortized cost was 7.9%.

In addition, as of October 24, 2019, Ares Capital had an investment backlog and pipeline of approximately $665 million and $265 million, respectively.

As mentioned in previous reports, dividend coverage should continue to improve (excluding the fee waivers that end in Q3 2019) over the coming quarters due to the following: 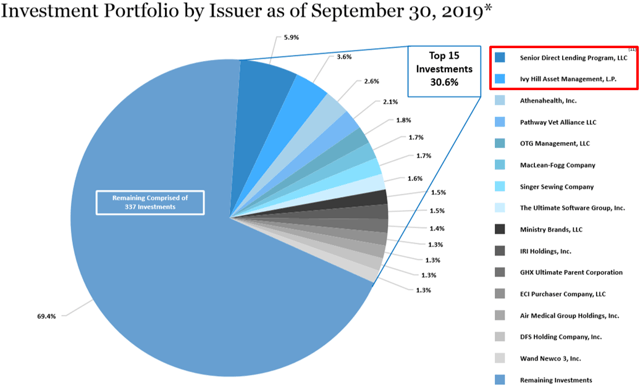 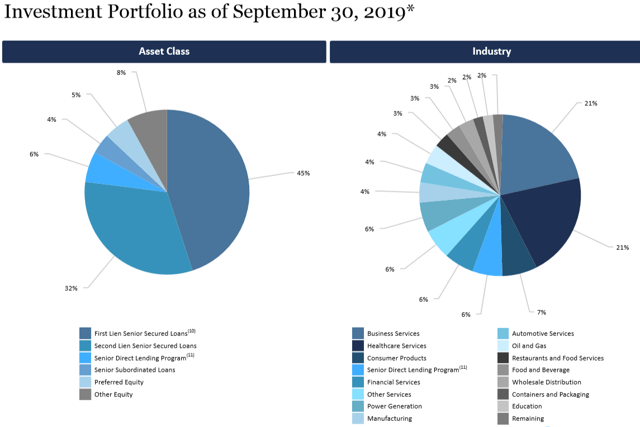