The following is from the GAIN Deep Dive that was previously provided to subscribers of Premium BDC Reports along with revised target prices, dividend coverage and risk profile rankings, potential credit issues, earnings/dividend projections, quality of management, fee agreements, and my personal positions for all business development companies (“BDCs”). 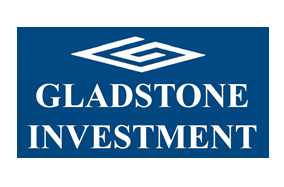 On December 11, 2019, GAIN announced the sale of its portfolio company Nth Degree, Inc. to MSouth Equity Partners, an Atlanta-based private equity firm resulting in “significant capital gain on its equity investment. As of September 30, 2019, Nth Degree, Inc. represented 11.7% of the total investment portfolio at fair value and is marked $52 million over cost with a potential realized gain of $1.59 per share using its September 30, 2019, fair value. However, there is a good chance that this amount will be less as discussed next.

Nth Degree is a provider of exhibit management services and event services to clients across the globe and was acquired by Capitala Group in partnership with GAIN and management in December of 2015 “providing capital and insights to advance Nth Degree to the next phase of growth.”

As shown below, CPTA had its preferred stock portion marked up by around 8 times cost as compared to GAIN which had it marked up by 10 times cost (shown in the previous table) as of September 30, 2019. 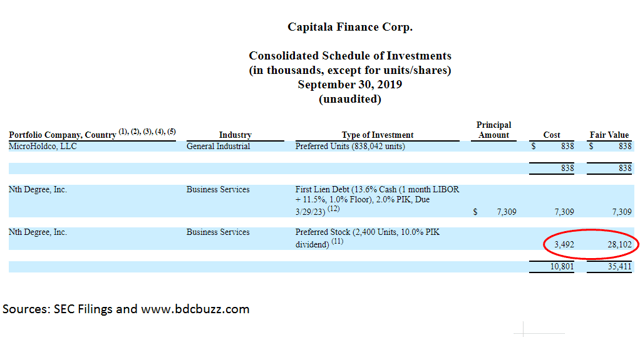 The gains from Nth Degree will be partially offset of by the exit of its investment in B-Dry, LLC in October 2019 resulting in a realized loss of $14.7 million ($0.45 per share) but will not impact NAV per share as it was already written off to $0 (discussed later).

Q. “On the B-Dry write off subsequent to quarter end, how does that impact these excess – the $0.82 you were talking about of excess income for distribution?

A. “Good question. So it would reduce that once that number is realized. The unrealized loss will slip into a realized loss and therefore, reduce the number that I quoted. If you look on our balance sheet, that number actually includes the unrealized piece of the portfolio as well. So if you were to go with a liquidating as of 9-30 perspective and I would point you to the balance sheet of amounts.”

Included in the announcement was the following comment from management mentioning “realizing gains on equity, provides meaningful value to shareholders through stock appreciation and dividend growth” implying that this will likely not be paid in cash but retained to reinvest and grow the regular dividends:

“With the sale of Nth Degree and from inception in 2005, Gladstone Investment has exited 20 of its management supported buy-outs, generating significant net realized gains on these investments in the aggregate,” said David Dullum, President of Gladstone Investment. “Our strategy as a buyout fund, realizing gains on equity, while also generating strong current income during the investment period from debt investments alongside our equity investments, provides meaningful value to shareholders through stock appreciation and dividend growth.”

Previously, GAIN declared a deemed distribution of long-term capital gains of $50 million or $1.52 per share. Shareholders, including myself, were likely disappointed as the “deemed distribution” is not paid in cash to shareholders and is a way for the company to retain the capital with the exception of the taxes paid. It should be noted that if this dividend was paid in cash it would be classified as long-term capital gains to shareholders (20% tax rate).

Also, on the recent earnings call, management mentioned that the Board will evaluate “any further deemed distributions of capital gains similar to the one we declared in March”:

As mentioned in the previous reports, the amount of preferred/common equity accounts for 33% of the portfolio fair value (marked well above cost) which needs to be partially monetized and reinvested into secured debt.

Also, there is a good chance for an increase to the regular dividend in 2020 due to retaining the realized gains, preserving NAV per share and the ‘math’ driven coverage of the dividend discussed next.

“Well, we certainly don’t want to cut the dividend. That’s always been a no-no for us and we’ll raise the dividend when we get in a position to raise it. So I would hope that we can raise it sometime in the near future. But we’re – we debate that every time the board gets together. And as you know, our next board meeting is in January, so we’ll keep our eyes on that and I want to raise the dividend. I’m a big proponent of raising the dividend and Dave Dullum and Julia who have to manage the balance sheet and the P&L always pushing back and making sure I don’t get too excited about raising the dividend. But we have a good discussion every quarter about raising the dividend. And I think you should look at the capital gain side of the business. It’s still strong and if you looked at what we could do, if everything works, I think you’ll get really, really happy with the aspect of getting some extra dividends during the next year.”

As mentioned in previous reports, the Board approved the modified asset coverage ratio from 200% to 150%, effective April 10, 2019. However, the company is subject to a minimum asset coverage requirement of 200% with respect to its Series D Term Preferred Stock. Historically, the company has maintained its leverage with a debt-to-equity ratio between 0.60 and 0.70 but is currently 0.45 giving the company plenty of growth capacity.

“Investment income declined slightly due to a $2.9 million decrease in other income, the timing of which can be variable, which affects the $2.3 million increase in interest income which was primarily driven by the collection of past-due amounts upon the exit of one portfolio company.”

Please keep in mind that ‘Core NII’ does not include capital gains incentive fees which are also broken out by the company: 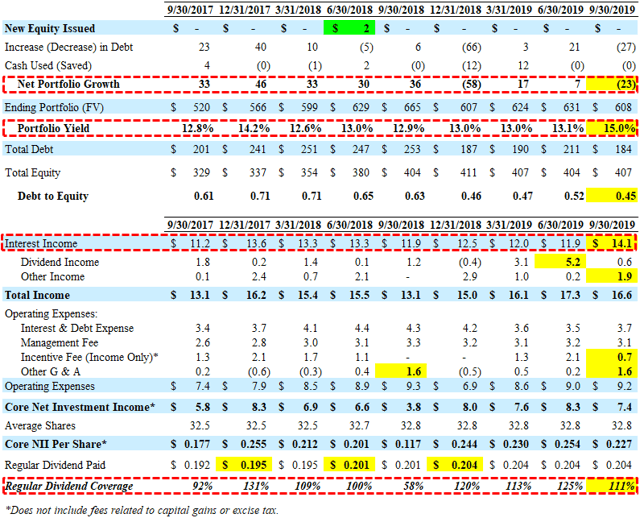