The following is from the PSEC Projections that was previously provided to subscribers of Premium BDC Reports along with revised target prices, dividend coverage and risk profile rankings, potential credit issues, earnings/dividend projections, quality of management, fee agreements, and my personal positions for all business development companies (“BDCs”). 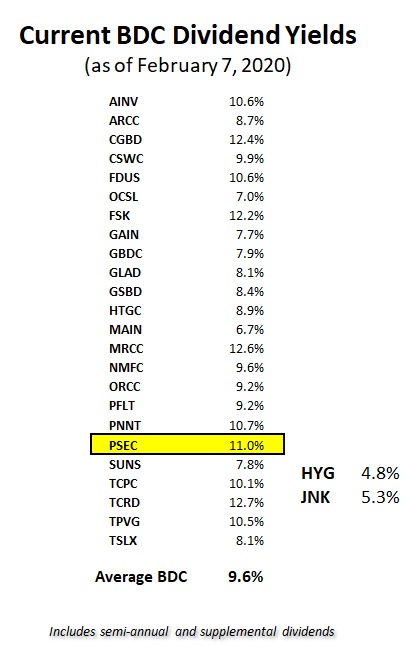 For calendar Q3 2019, Prospect Capital (PSEC) reported below its base case projections due to another decline in portfolio investments and lower-than-expected portfolio yield. Interest and total income continue to decline with a debt-to-equity at 0.70 (lower end of target range).

As predicted, its net asset value (“NAV”) per share decreased by 1.6% or $0.14 (from $9.01 to $8.87) due to additional markdowns in its CLO investments, Valley Electric , CP Energy Services and non-accrual investments including InterDent, Inc. USES Corp. and Pacific World. These losses were partially offset by gains in National Property REIT Corp. (“NPRC”) and its non-accrual investment in Edmentum Ultimate Holdings that is now marked at 143% of cost but still on non-accrual. 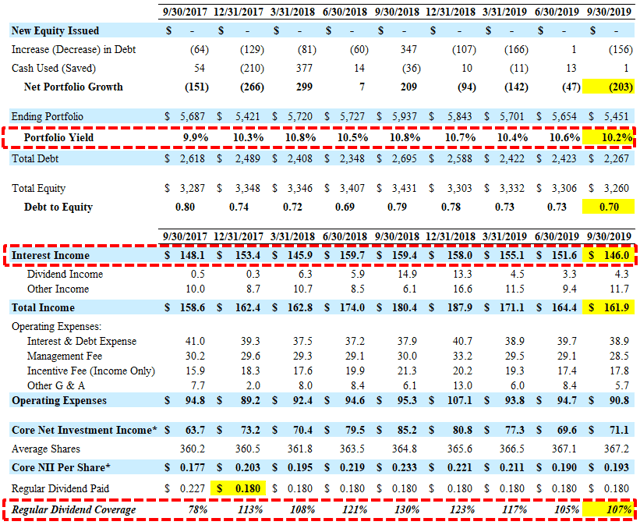 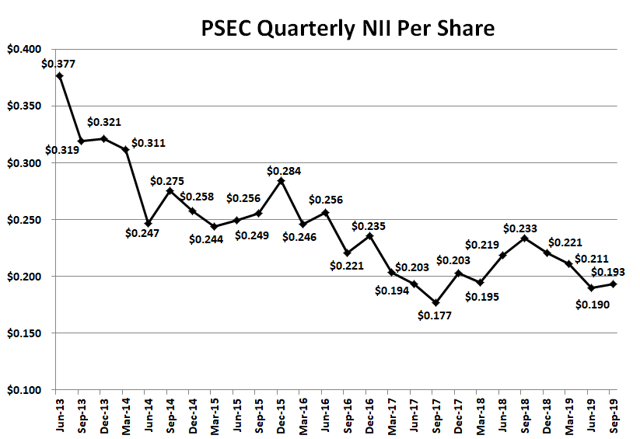 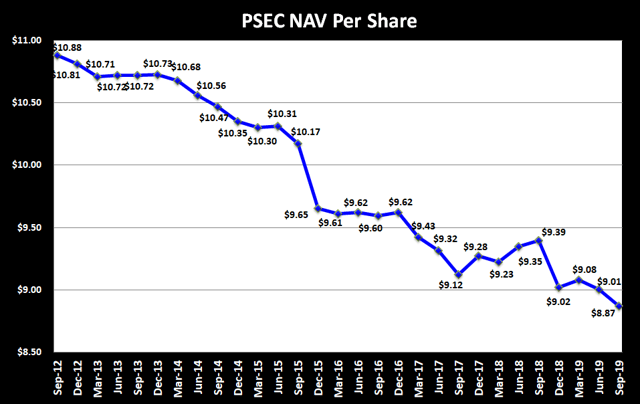 Non-accruals declined due to the previously discussed markdowns and currently around 8.1% of the portfolio at cost and declined to around 2.4% at fair value (previously 3.0%).

As mentioned in the previous report, primary concerns include portfolio concentration issues including its “top 10 investments accounting for over 40% of the portfolio” and the amount of equity investments. Also mentioned was that “InterDent, Inc. remains one of its largest investment and needs to be watched.” Previously, PSEC extended its loans to InterDent, which were past due as well as being marked down “but still marked near cost and likely overvalued”. During calendar Q2 2018, PSEC assumed control of InterDent and as shown in the following table, PSEC only placed around $41 million of the $252 million loans with InterDent on non-accrual. There is a chance that the other loans could be placed on non-accrual that would have a meaningful impact upcoming to dividend coverage. Also, InterDent still accounts for around $0.56 per share or 6.3% of NAV.

Its Term A and B loans to Pacific World remain on non-accrual status and continue to be marked down but still account for around $0.27 per share or 3.1% of NAV.

I consider PSEC to have a higher risk portfolio due to the previous rotation into higher yield assets during a period of potentially higher defaults and later stage credit cycle concerns, CLO exposure of 16% combined with real-estate 16%, online consumer loans of 2%, consumer finance of 12% and energy, oil & gas exposure of 3%. As mentioned in previous reports, Moody’s and S&P Global Ratings also consider the CLO, real-estate and online lending to be riskier allocations that currently account for almost 34% of the portfolio. 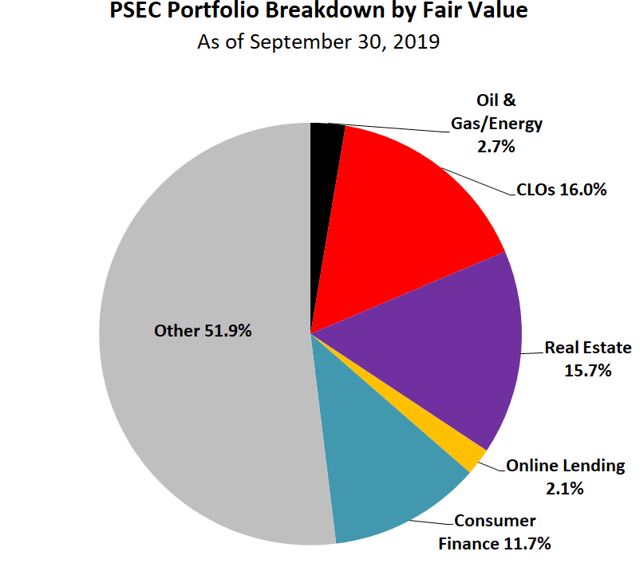 Moody’s could upgrade PSEC’s ratings if the company: 1) decreases debt/tangible equity to not more than .7x, doesn’t increase its structured credit and real estate exposures as a proportion of total investments, further enhances financial flexibility by obtaining prior shareholder consent to issue shares at a price below net asset value, and generates profitability that consistently compares well with BDC peers, taking into consideration differences in investment strategies.

Moody’s could downgrade the ratings if PSEC increases the ratio of net debt to equity to more than .85x, increases structured credit and real estate equity investments without decreasing leverage, pays dividends that exceed net investment income on a regular basis, or generates profitability that is weaker than expected compared to peers.

On October 12, 2018, S&P Global Ratings affirmed its ‘BBB-‘ issuer credit rating on Prospect Capital Corp. (“PSEC”) and previously removed the ratings from CreditWatch, where they were placed on April 3, 2018, with negative implications. The negative outlook was due to “PSEC’s leverage near the upper end of our expectations for the ratings and our view that certain of its investments may have more volatile valuations than typical BDC investments.” The stable outlook reflects S&P Global Ratings’ expectation that Prospect Capital Corp. (PSEC) will maintain reported debt to equity below 0.85x and will not adopt a modified asset coverage requirement from the current 200%. We expect PSEC will maintain investment portfolio results consistent with other BDCs that we rate investment grade.

We could lower the ratings over the next 12-24 months if: