The following is from the GBDC Update that was previously provided to subscribers of Premium BDC Reports along with revised target prices, dividend coverage and risk profile rankings, potential credit issues, earnings/dividend projections, quality of management, fee agreements, and my personal positions for all business development companies (“BDCs”). 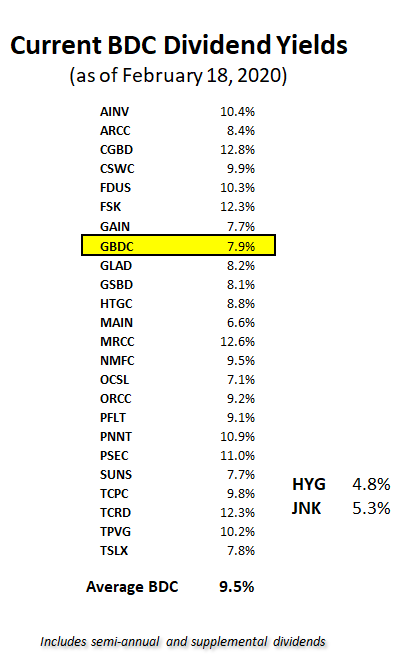 For the quarter ended December 31, 2019, Golub Capital BDC (GBDC) hit its base case projections covering its dividend by 102%. As predicted, Oliver Street Dermatology was added to non-accrual status but total non-accruals remain low as discussed next. 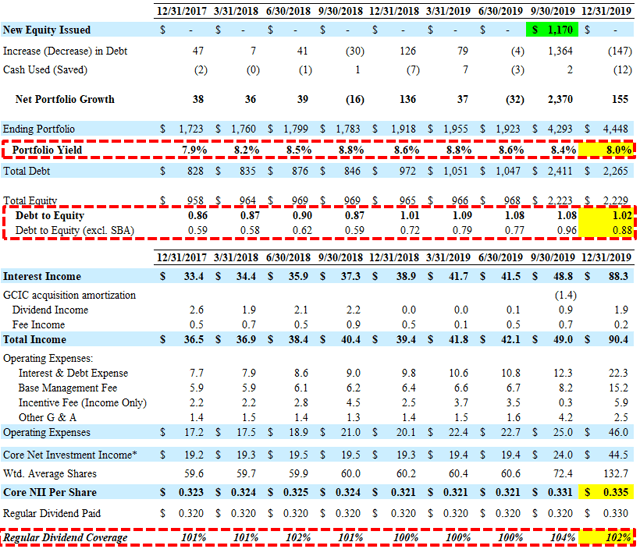 Portfolio credit quality remains strong with low non-accrual investments as a percentage of total investments at 1.2% and 1.5% of fair value and cost, respectively. As discussed in previous updates, U.S. Dermatology Partners has defaulted on a $377 million financing provided by a group of investment firms, according to people with knowledge of the matter. The dermatology practice owner is now reviewing its options, including a recapitalization or debt-for-equity swap with its current lenders, Golub Capital, The Carlyle Group Inc. and Ares Management, according to the people, who asked not to be identified because they aren’t authorized to speak about it. During the previous earnings call, GBDC management was asked about its related investment in Oliver Street Dermatology:

Q. “I saw the — a change to the mark and addition of a PIK component to Oliver Street Dermatology. So wanted to ask what’s going on there?”

A. “I’m going defer discussing a specific situation like Oliver Street. I don’t think it is an appropriate topic for this call.”

During the most recent call, GBDC management discussed additional non-accruals (including Oliver Street Dermatology) mentioning that they are “cautiously optimistic that in respect of both companies, we are on a good path toward good recoveries”:

“So non-accruals at cost and fair value increased in the most recent quarter to 1.6% and 1.3%, respectively. Whenever we think about non-accruals, we feel a degree of concern, right. We are naturally worriers. We worry about everything. One of the things we worry about is non-accruals. I want to make sure, though, that everyone keeps our concerns in appropriate context. So first, this quarter GBDC continued its strong track record of generating positive net realized and unrealized gains on investments. And that’s the metric that we think is, over time, the most important indicator of credit performance. That’s why we focus so much in our earnings presentation each quarter on the chart in our presentation depicting NAV per share over time. A second way we look at credit and overall credit quality is based on risk ratings, I think they show a great deal of stability quarter-over-quarter and for many quarters in a row. And the third contextual point I will make is that the latest figures indicate that even with this small increase, we are still in the low end of the range of the industry and we are in our historical range in respect of non-accruals at cost. So I don’t want to make any of this sound like it’s more dramatic than it is. With that said, we are working hard with the managements of the two companies that we put on non-accrual this quarter and I can’t get into the details of either of the two situations, but what I can say is, I am cautiously optimistic that in respect of both companies, we are on a good path toward good recoveries.

Oliver Street Dermatology and MMan Acquisition Co. were previously considered ‘watch list’ investments (please see GBDC Deep Dive report for discussions) and were added to non-accrual status during the recent quarter. The Sloan Company, Advanced Pain Management, and Paradigm DKD Group were added to non-accrual status during the previous quarter and the two other investments that remain on non-accrual are Aris Teleradiology Company and Uinta Brewing Company.

It is important to remember that GBDC has 250 portfolio companies, so a certain amount on non-accrual status is to be expected. 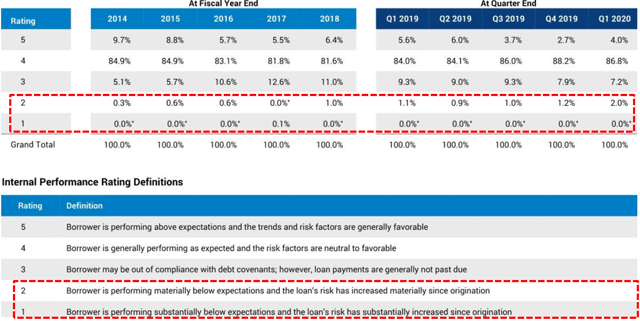 As mentioned in the previous report, there was a meaningful increase in GBDC’s net asset value (“NAV”) per share during the previous quarter mostly due to the accretive acquisition of Golub Capital Investment Corporation (“GCIC”). During the three months ended December 31, 2019, NAV per share decreased by $0.10 or 0.6% (from $16.76 to $16.66) mostly due to paying a special distribution of $0.13 per share. 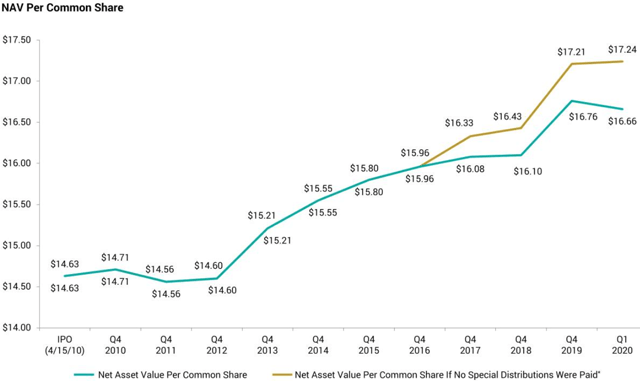 GBDC has predictably boring quarterly NII of $0.33/ $0.32 mostly due to its fee structure combined with strong portfolio credit quality. The financial projections use a wide range of assumptions but because of the incentive fee hurdle, the dividend is consistently covered by design. This calculation is based on “net assets” per share which will increase due to the merger driving a higher amount of “pre-incentive fee net investment income” per share before management earns its income incentive fees.

The annualized quarterly return from its Senior Loan Fund LLC (“SLF”) and GCIC SLF were 2.4% and 10.1%, respectively, for the quarter ended December 31, 2019. However, as predicted and discussed in the previous report, GBDC has decided to dissolve its SLF and finance the assets directly on its balance sheet (driving higher leverage) and will be taken into account with the updated projections:

“On January 1, 2020, the Company entered into a purchase agreement with RGA, Aurora, SLF, and GCIC SLF (the “Purchase Agreement”). Pursuant to the Purchase Agreement, RGA and Aurora (together the “Transferors”) agreed to sell their LLC equity interests in SLF and GCIC SLF, respectively, to the Company, effective as of January 1, 2020. As consideration for the purchase of the LLC equity interests, on or before March 2, 2020, the Company has agreed to pay the Transferors an amount, in cash, equal to the net asset value of their respective LLC equity interests as of December 31, 2019 (the “Net Asset Value”) along with interest on such Net Asset Value accrued from the date of the Purchase Agreement through, but excluding, the payment date at a rate equal to the short-term applicable federal rate. As a result of the Purchase Agreement, on January 1, 2020, SLF and GCIC SLF became wholly-owned subsidiaries of the Company. In addition, the capital commitments of the Transferors to the SLFs were terminated. As wholly-owned subsidiaries, the assets, liabilities, profit and losses of the SLFs will be consolidated into the Company’s financial statements and notes thereto for periods ending on or after January 1, 2020, and will also be included for purposes of determining the Company’s asset coverage ratio.” 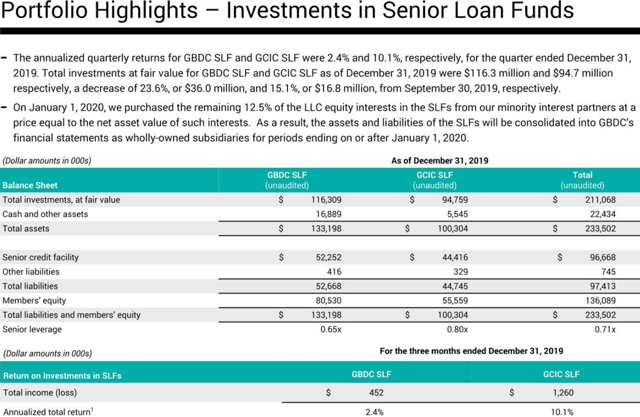 There was another decline in overall portfolio yield from 8.4% to 8.0% due to new investments at lower yields of 7.4% as shown in the following table. 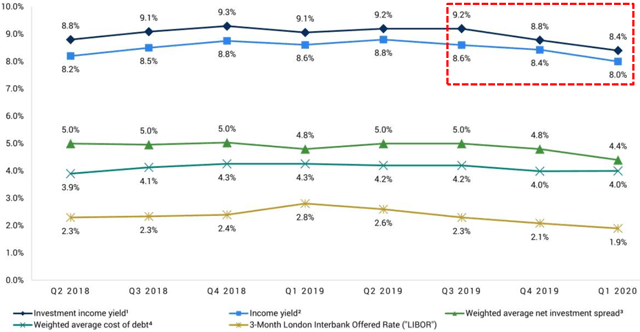 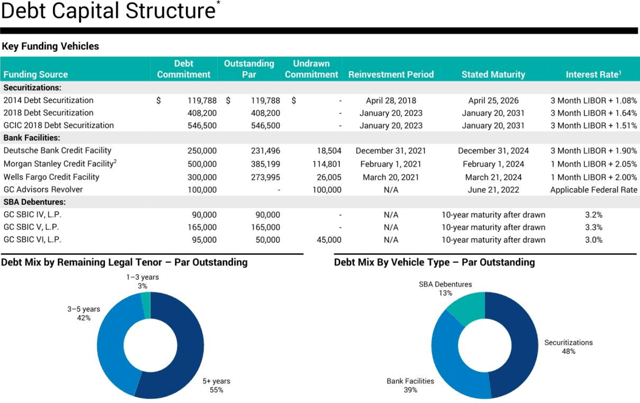