TPVG’s dividend coverage needs to be assessed on an annual basis due to the lumpy nature of earnings from successful portfolio companies prepaying loans. This results in certain periods of higher prepayment fees driving higher earnings often followed by lower earnings due to being underleveraged and not having a fully invested portfolio.

“I would like to remind everyone that while prepayments are a natural part of our venture lending model, it does come with a great deal of uncertainty. One of the other aspects of prepayment activity is that the origination vintage of alone that prepays really does matter. Given the nature of income acceleration when a loan prepays, the characteristics of income changes, the longer the loan remains outstanding, for example, should alone repay or prepay in its first year, we would generally recognize a comparatively higher level of income.”

“Our earnings were impacted by the significant prepay activity we’ve experienced over the past several quarters on our overall portfolio size, despite strong new commitments, growing investment funding and stable core portfolio yield is in the past. We believe any shortfall is temporary and will be more than made up during the rest of the year as the fundamentals of our industry.”

Also, there were some timing issues with new investments near the end of the quarter which did not contribute a full quarter of income and likely some prepayments earlier in the quarter:

A. “Yeah. So I think generally that is what happens, fundings tend to occur towards the end of the quarter and usually in the last month of a quarter in particular and prepays, I think we, we had announced on our year end results that we had already had some prepay. So that was definitely the case for Q1. And I would, I would argue that that’s, that’s pretty typical. We’re fundings tend to average short towards the latter half of, of a quarter in prepays can happen in the early part as well.”

However, since March 31, 2021, and through May 4, 2021, the company has already received $46 million of prepayments generating more than $2.0 million of accelerated income. There is a good chance that many of the prepayments for Q1 ended up in Q2 and the first quarter is typically the slowest for new investments.

“We remain in a strong position to generate NII or net investment income in excess of our distribution over the longterm. As we always have in fact, over the last four years and cumulatively, since our IPO, we have over earned our distribution. We’ve also paid three special distributions, including one that we just made last week. Additionally, other trend that we will benefit from is the acceleration of exit events”

As of March 31, 2021, the company’s unfunded commitments totaled $168.8 million and through May 4, 2021, had closed $52.0 million of additional debt commitments and funded $23.7 million in new investments. Leverage remains low due to previous early repayments driving a debt-to-equity ratio of 0.57 net of cash giving the company plenty of growth liquidity.

“We need to position ourselves to take advantage of the strong demand we are seeing from venture growth stage companies. We expect this to continue throughout 2021 and the first quarter we increased signed term sheets by 142% year over year. And our pipeline continues to be more than a billion. We expect to accelerate funding throughout 2021. And our poise drawn our ample liquidity, which we further enhanced in the first quarter through upsizing our credit facilities and also completing our second investment grade notes offering under very attractive terms.”

The Board reaffirmed its quarterly distribution of $0.36 per share for Q2 2021 and there is still estimated spillover income of $0.45 per share for temporary dividend coverage shortfalls as well as another Q4 2021 special dividend.

“As of June 16th to be paid on June 30th, we have significant spillover income totaling, approximately $14 million or $0.45 per share at the end of the quarter to support additional distributions in the future.” 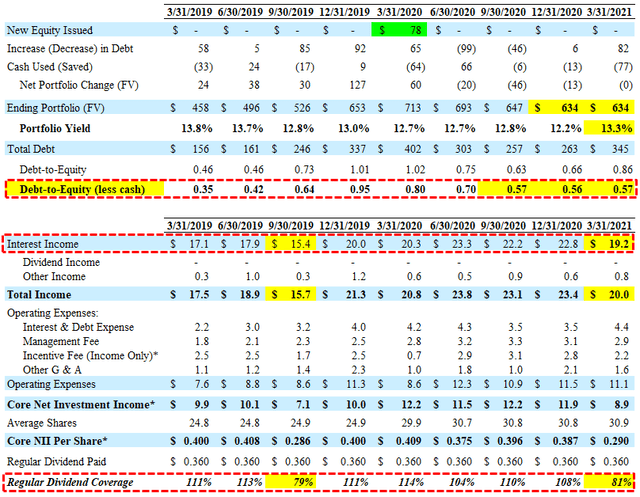 As shown below, early prepayments are lumpy including a previous low in Q3 2019 driving lower portfolio yield and much lower dividend coverage as shown in the previous table. 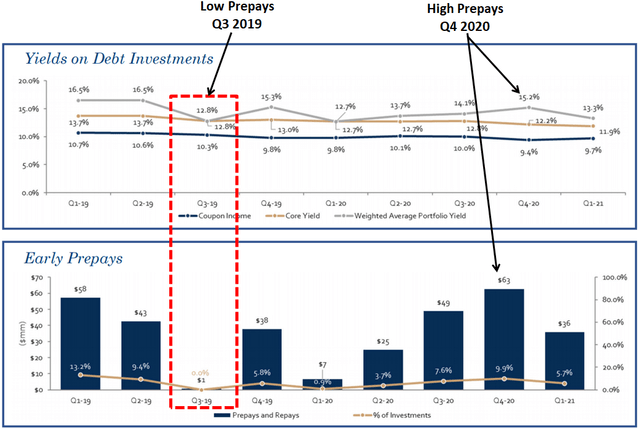 On March 1, 2021, TPVG closed a private offering of $200 million 4.50% institutional unsecured notes due 2026, and used a portion of the proceeds to redeem its 5.75% Baby Bond (TPVY) lowering its overall borrowing rates:

“During the first quarter, we executed on our playbook to diversify our funding sources, lower our cost of capital, and strengthen our funding capabilities. Upsizing our credit facility and completing our second investment grade notes offering will enable us to meet the increasing demand from venture growth stage companies.”

From previous call: “we are refinancing our most expensive term debt to baby bonds with 22% cheaper notes. Concurrently, with the private notes offering this week, DBRS maintains its investment-grade rating [BBB] on TPVG given the strength and diversity of our portfolio and the reasonable level of leverage we maintain.” 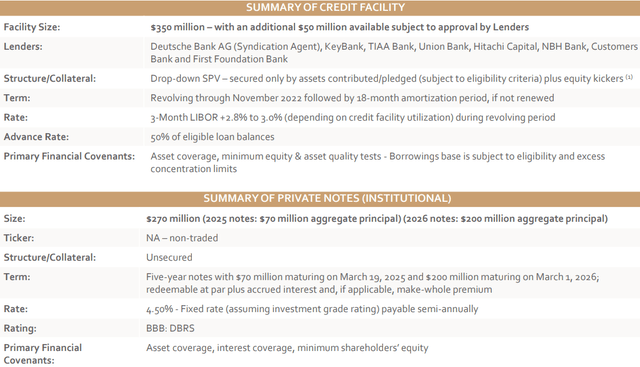 It should be noted that TPVG is one of the only BDCs currently with 100% unsecured borrowings giving the company much more flexibility over the coming quarters: