Leverage continues to decline and is now well below its targeted debt-to-equity ratio range of 1.40 to 1.50, currently at 1.07 net of cash giving the company plenty of capital for upcoming portfolio growth and improved earnings.

“We are poised to significantly grow NII through a three pronged strategy, which includes number one, growing assets on balance sheet at PFLT, as we move towards our target leverage ratio of 1.50 times debt to equity from 1.10 times. Number two, growing our PSSL JV with Kemper to about $730 million of assets from approximately $500 million. And number three, rotating the equity value in the portfolio that has come from a strong equity co-investment program into cash paying debt instruments.”

On October 6, 2021, PFLT priced an additional $85 million of 4.25% unsecured notes due 2026 at a premium resulting in a yield-to-maturity of 3.875%. This is a lower rate than the $100 million notes issued in March 2021 at a discount resulting in a yield-to-maturity of 4.375% and has been taken into account with the updated projections. These notes further strengthen the overall balance sheet giving the company additional flexibility for long-term portfolio growth. Effective January 19, 2021, PFLT reduced the size of its credit facility from $520 million to $400 million in order to reduce the cost of the unused facility fees.

PFLT will likely not fully cover its dividend for the coming quarter but had around $0.22 per share of undistributed/spillover income that can be used for temporary dividend coverage issues. On October 4, 2021, PFLT reaffirmed its monthly distribution for October 2021:

The company is looking to improve returns from its PennantPark Senior Secured Loan Fund (“PSSL”) through previously refinancing the borrowing facilities and growing the portfolio using higher leverage. Total investments in its PSSL portfolio have increased from $393 million to almost $530 million over the last three quarters and the weighted average yield on investments increased from 6.8% to 7.2%. These increases are driving higher dividend income that increased to $2.3 million for the most recent quarter.

“With regard to the PSSL JV, with the CLO financing we completed earlier this year, as well as additional capital contributions from PFLT and Kemper, the JV will grow over time. The capital contributions from PFLT are targeted to generate a 10% to 12% return. During the June quarter, PFLT invested $20 million of capital and we intend to invest another 42 million over time in order to bring PFLT’s investment into PSSL to approximately $243 million.”

“Quarter-to-date, repayments have been light and newer originations have been heavy. So last quarter, there were a lot of repayments. This quarter so far we’ve seen lighter repayment. We’re seeing a lot of new companies come in. Sometimes there’s the same more companies that get recycled and they go from one private equity firm to another, one private lender to another. This quarter, we’re seeing many more new companies come into the system.”

Also, PFLT will likely be rotating out of non-income-producing assets and reinvesting into higher-yielding assets over the coming quarters.

From previous call: “The combination of potential income growth from equity rotation, a larger and more efficiently financed PSSL, and a growing more optimized PFLT balance sheet should help grow the company’s net investment income relative to the dividend over time.”

There is a good chance that PFLT will be selling its equity positions in Cano Health, Inc. (CANO), Walker Edison Furniture, By Light Professional IT Services, and PT Networks. These investments account for $28.3 million or 2.7% of the portfolio and the proceeds will likely be reinvested into income-producing assets. As shown in the following table, these investments are marked well above cost and could result in $25.7 million or $0.66 per share of realized gains if sold at the current fair values potentially driving supplemental dividends in 2022. However, the company has offsetting realized losses from previous years and will likely be used to support temporary dividend coverage shortages.

Management discussed some of these investments on the recent call mentioning additional NAV upside as well as increased earning potential through reinvestment:

From previous call: “We are pleased that we have significant equity investments in three of these companies, which can substantially move the needle in both NAV and over time net investment income. Cano, Walker Edison and By Light. All three of these companies are gaining financial momentum in this environment. And our NAV should be solidified and bolstered from these substantial equity investments as their momentum continues. Over time, we would expect to exit these positions and rotate those proceeds into debt instruments to increase income at PFLT. Walker Edison is leading e-commerce platform focused on selling furniture exclusively online through top e-commerce companies. As of March 31st, our equity position had a cost of $1.4 million and a fair market value of $12.1 million. Shortly after quarter end, the company executed a refinancing and dividend recap, which resulted in shareholders receiving approximately two times their costs, while maintaining the same ownership percentage in the company. This resulted in PFLT receiving a $2.8 million cash payment on its equity position. By Light is a leading software, hardware and engineering solutions company focused on national security challenges across modeling and simulation, cyber and global defense networks. Our position has a cost of $2.2 million and a fair market value of $11.8 million as of March 31st.”

For the three months ended June 30, 2021, PFLT slightly beat its base case projected net investment income (“NII”) of $0.261 due to higher-than-expected other income and maintained dividend income from its PennantPark Senior Secured Loan Fund (“PSSL”).

Art Penn, Chairman/CEO: “We are pleased with the strong performance of our portfolio this past quarter. Our PSSL joint venture saw significant growth. We believe that the growth of PSSL in conjunction with the Company’s growing, more optimized balance sheet and the rotation of equity positions into debt instruments, positions the Company well for increased income over time.” 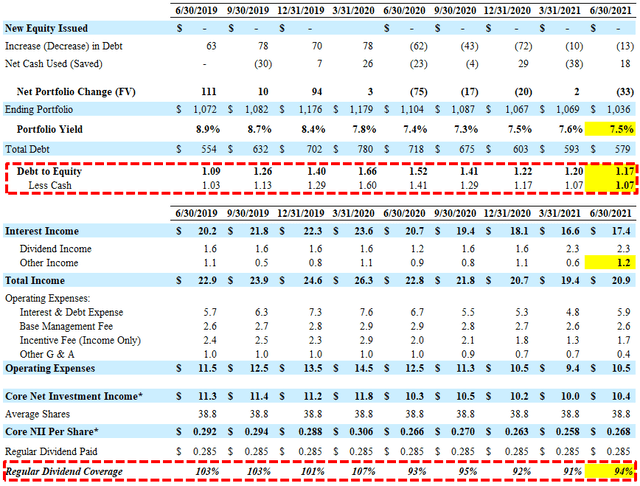 For calendar Q2 2021, PFLT’s net asset value (“NAV”) per share increased by 0.8% but there was net realized losses of almost $13 million due to exiting its non-accrual investment in Country Fresh Holdings which has been discussed in many previous reports.

“The main driver of the realized loss was Country Fresh, which was a non-accrual which went through bankruptcy and is now not on the balance sheet anymore.”

“There were two capital events for Walker Edison in this past quarter. One was a dividend recap where two times we got back two times our money on the equity and then there was an investment by Blackstone where we got another two times our investment. So that was a nice cash realization on Walker Edison that came our direction on equity. Just looking at the quarter, I mean, that was the big one. It was about four point — that was a realized gain of about $4.3 million in the quarter. It was offset by Country Fresh. So the realization of the Country Fresh loss offset that, we had about a $1.4 million realized gain on DecoPac equity. And we had about $700,000 gain on WBB equity.”

American Teleconferencing Services was added to non-accrual status during the quarter. As of June 30, 2021, non-accrual accounted for 2.8% and 2.7% of the overall portfolio on a cost and fair value basis, respectively. If these investments were completely written off the impact to NAV per share would be around $0.72 or 5.6%.

“We did have a non-accrual — we had additional non-accrual American teleconferencing which is called Premier Global that was unrealized loss. We have only two non-accruals out of 105 different names in PFLT and PSSL. This represents only 2.8% of the portfolio of cost and 2.7% at market value.”

“As of June 30th average debt to EBITDA in the portfolio was 4.2 times and average interest coverage ratio, the amount by which cash income exceeds cash interest expense was 3.3 times. This provides significant cushion to support stable investment income. These statistics are among the most conservative in the direct lending industry.”

“We have largely avoided some of the sectors that have been hurt the most by the pandemic such as retail, restaurants, health clubs, apparel, and airlines and PFLT also has no exposure to oil and gas. The portfolio is highly diversified with 100 companies in 42 different industries. Our credit quality since inception over 10 years ago has been excellent. Out of 381 companies in which we have invested since inception, we’ve experienced only 14 non-accruals.” 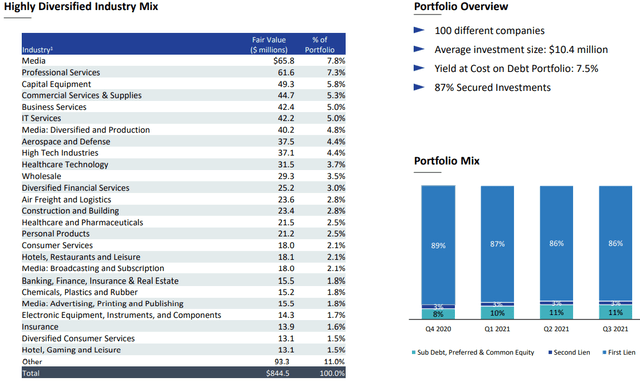