The following information was previously provided to subscribers of BDC Buzz Premium Reports along with:

On October 28, 2021, Blackstone Secured Lending Fund (BXSL) closed its initial public offering of 9,180,000 shares at a public offering price of $26.15 per share and on November 4, 2021, the underwriters exercised their option to purchase an additional 1,377,000 shares. However, fewer than 6 million shares have traded since the IPO and were recently averaging around 34,000 shares daily. The company has around $9 billion in assets after taking into account the IPO proceeds making it the 4th largest publicly traded BDC. 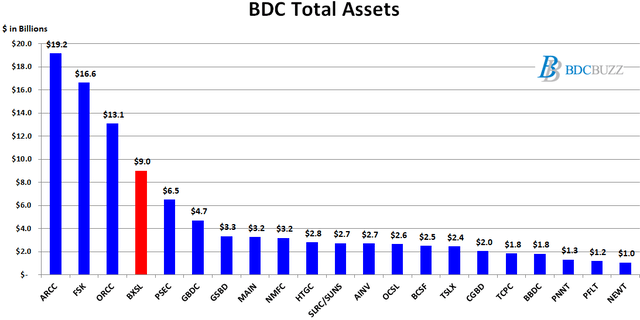 Earlier this week in the “BDC Sector Weekly Update: December 27, 2021” we provided the following update to subscribers of BDC Buzz Premium Reports:

“I typically do not suggest selling BDC stocks unless there are upcoming credit and/or dividend coverage issues. However, BXSL is overpriced at these levels and on January 3, 2022, there is a very good chance that this stock will trade below where it currently is which is $37.64. BXSL trades around 34,000 shares daily which is almost considered “illiquid” and is likely why the price is detached from fundamentals. I am certain that when pre-IPO shareholders are able to sell 10% of their positions next month they will which means that an additional 15.8 million shares will hit the market. Keep in mind that could sell simply for portfolio diversification needs.”

As shown below, the stock has started to decline and I expect to continue especially after my upcoming public article discussing portions of this report. I will likely start a position in BXSL near or below its LT target price.

As always public articles will not include target prices, rankings, or dividend coverage projections as this information is only for subscribers of Premium BDC Reports.

As of November 11, 2021, there were 168,946,951 outstanding (including the IPO amount of ~10.6 million). All shareholders owning shares before the IPO are subject to a lock-up period with a staged liquidity schedule over a period of eight months following the IPO. This means that 15.8 million more shares will be on the market as of January 3, 2022, increasing to all 169 million through July 1, 2022.

BXSL is almost “illiquid” at current trading volumes and is likely why the price is detached from fundamentals. I am certain that when pre-IPO shareholders are able to sell 10% of their positions next month they will, simply for diversification needs and/or being overpriced. 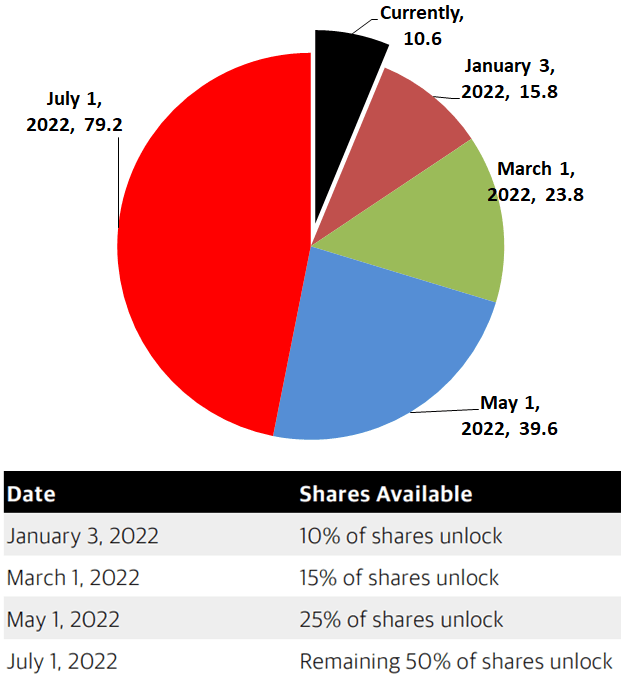 ORCC’s stock price started to decline after the Q4 2019 ex-dividend date and then through the first lock-up expiration. I have included the comparison with the S&P 500 that was headed higher at that time. ORCC was previously trading around $19.00 for a regular dividend yield of around 6.5% or 8.2% including the temporary special dividends (similar to BXSL currently yielding 5.7% or 7.5% with specials). However, the price quickly declined to just under $16.00 driving a more appropriate yield of 7.8% or 9.8% with the temporary specials. 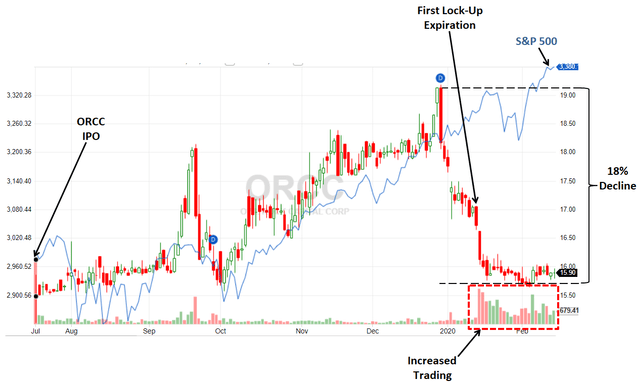 BXSL is for lower-risk investors that do not mind lower yields with an investor-friendly fee structure and over 98% of its portfolio invested in first-lien positions of larger companies (relative to smaller BDCs) that would likely outperform in an extended recession environment. Also, BXSL has a relatively stable NAV with no investments on non-accrual status and an excellent balance sheet of lower-cost flexible borrowings that are 71% unsecured.

“Our high-quality portfolio, concentrated in first-lien senior secured loans with no loans on non-accrual, and active deployment in the quarter underscore the benefits of our scale, expertise and market position. We are pleased to bring a low-fee, low-operating expense BDC product to the market and look forward to continuing to deliver for our investors as a public company.”

The following are some high-level positives for BXSL:

The following are some high-level negatives for BXSL:

In connection with the IPO, the Board declared the following special distributions but please keep in mind that these are temporary and only for 2022 related to the IPO similar to what ORCC paid in 2020 discussed next. 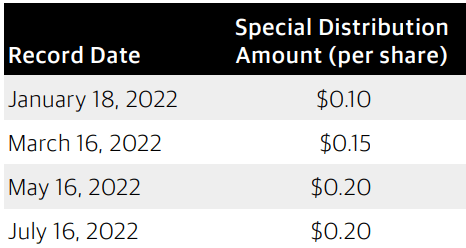 It should be pointed out that the company had undistributed earnings as of September 30, 2021, some of which was due to over-earning the dividend and realized gains which is a good sign. But of course, quite a bit was driven by unrealized gains which are also good but do not necessarily need to be paid out. I am guessing that the $0.65 per share of special dividends in 2022 is directly related to these amounts as it comes to almost $110 million and is likely being used to encourage previous shareholders to hold shares rather than sell.

As of November 26, 2021, the company has the ability to acquire approximately $262 million (representing the net proceeds from the IPO) of common shares at prices below NAV per share in accordance with the guidelines specified in Rule 10b-18 and Rule 10b5-1 or a period of twelve months.

“The company put the share repurchases program in place because it believes that, in the current market conditions, if common shares are trading below the then-current net asset value per share, it is in the best interest of the Company’s shareholders for the Company to reinvest in its portfolio.”

As mentioned earlier, BXSL has a relatively new portfolio and credit issues typically do not show up until later in the second year or early third year. However, I have had a chance to go through the portfolio and there are mostly higher-quality companies. I have put together a ‘watch list’ with only a few that have been marked down slightly including Plantronics (unsecured debt, communications equipment), Tennessee Bidco (insurance), Spitfire Parent (software), and Abaco Energy Technologies (energy equipment and services). However, these investments only account for around 1.1% of the portfolio and are still mostly fully valued (implying no impairment).

As of September 30, 2021, 99.9% of its debt investments at fair value were at floating rates. BXSL is one of the best-positioned BDCs for rising interest rates including the first 100 basis points as shown below:

What Can I Expect Each Week With a Paid Subscription?

Each week we provide a balance between easy to digest general information to make timely trading decisions supported by the detail in the Deep Dive Projection reports (for each BDC) for subscribers that are building larger BDC portfolios.

This information was previously made available to subscribers of BDC Buzz Premium Reports. BDCs trade within a wide range of multiples driving higher and lower yields mostly related to portfolio credit quality and dividend coverage potential (not necessarily historical coverage). This means investors need to do their due diligence before buying including setting target prices using the portfolio detail shown in this article (at a minimum) as well as financial dividend coverage projections over the next three quarters as discussed earlier.