The following is from the MRCC Update that was previously provided to subscribers of Premium BDC Reports along with revised target prices, dividend coverage and risk profile rankings, potential credit issues, earnings/dividend projections, quality of management, fee agreements, and my personal positions for all business development companies (“BDCs”).

Monroe Capital (MRCC) hit its base-case projections due to continued fee waivers to cover the current dividend. As shown below, dividend coverage would have been around 91% without fee waivers. As mentioned in previous reports, my primary concern is the relatively low dividend coverage with materially increased leverage as the debt-to-equity is now approaching the highest in the sector at 1.75. It should be noted that the increased leverage is partly due to continued declines in NAV per share including another 1.4% in Q3 2019.

Theodore L. Koenig, CEO: “As we have grown the portfolio over the last year to utilize the additional leverage capacity available under the Small Business Credit Availability Act, we have taken a shareholder friendly action to amend and reduce our management fee calculation, effective as of the beginning of the third quarter. This amendment has the effect of reducing our annual base management fee rate on assets in excess of regulatory leverage of 1:1 debt to equity to 1.00% from 1.75% per annum. As with the prior calculation, there is no management fee paid on cash and restricted cash assets. The combination of our reduced management fee structure and our continued incentive fee waiver demonstrates our commitment to maintaining dividend coverage with net investment income and creating value for our shareholders. All of this reflects our confidence in the long-term strength of our business.” 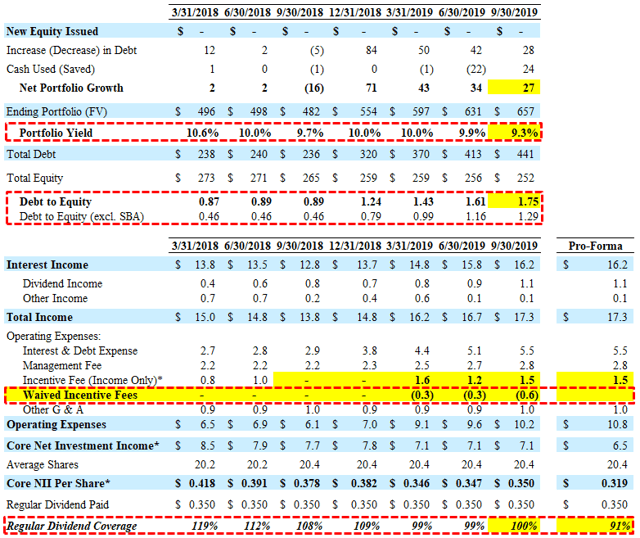 During Q3 2019, its net asset value (“NAV”) decreased by $0.18 or 1.4% (from $12.52 to $12.34) mostly due to additional markdowns in previously discussed ‘watch list’ investments including Luxury Optical Holdings Co. and The Worth Collection that were added to non-accrual status during Q3 2019. Also added to non-accrual were its loans to Curion Holdings as its promissory notes were already on non-accrual. The total fair value of investments on non-accrual increased from $14.0 million to $30.7 million and account for around 4.7% of the portfolio fair value and $1.50 per share or around 12.2% of NAV.

“While we are pleased with the growth in our portfolio, an increase of $26.6 million during the quarter, and the continued coverage of our dividend by net investment income, we are not happy with the slight decline of 1.4% in our per share NAV. Over the past several quarters, we have seen some idiosyncratic credit issues with a few borrowers. We do not believe these isolated issues are representative of our portfolio as a whole. We feel we are on the right track in resolving some of these credit issues and we hope to be able to see the results of our efforts in the coming quarters.”

Other non-accruals include Incipio, LLC third lien tranches and Rockdale Blackhawk, LLC (“Rockdale”). However, the Curion promissory notes and the Incipio third lien tranches were obtained in restructurings during 2018 for no cost. The fair value of its investment in Rockdale remained stable but previously filed for bankruptcy as part of a restructuring process. MRCC’s total investment in Rockdale accounts for almost $18 million (around 2.7% of the portfolio) and $0.88 (or 7.1%) of NAV per share.

Education Corporation of America (“ECA”) was added to non-accrual status during Q4 2018 and are ‘junior secured loans’ and preferred stock as compared to first-lien positions. American Community Homes, Inc. remains discounted and will be discussed in the updated MRCC Deep Dive report.

Another issue that will be discussed in the updated report and needs to be watched is the amount of payment-in-kind (“PIK”) that continues to increase from 5.3% of total income in Q3 2018 to 9.4% during Q3 2019:

Grade 4: Includes an issuer performing materially below expectations and indicates that the issuer’s risk has increased materially since origination. In addition to the issuer being generally out of compliance with debt covenants, scheduled loan payments may be past due (but generally not more than six months past due). For grade 4 investments, we intend to increase monitoring of the issuer.

Grade 3: Includes investments performing below expectations and indicates that the investment’s risk has increased somewhat since origination. The issuer may be out of compliance with debt covenants; however, scheduled loan payments are generally not past due.

In June 2018, shareholders approved the company becoming subject to a minimum asset coverage ratio of 150% allowing for higher use of leverage. The company had $38.4 million available for additional borrowings on its revolving credit facility. Previously, MRCC had higher dividend coverage due to the ‘total return requirement’ driving no incentive fees paid. The following was from the previous earnings call:

“It has everything to do with where the NAV of the portfolio is in any given quarter and the performance on NII and dividends paid to shareholders. So it just depends on what happens each quarter going forward. And it’s a formulaic, as you said it’s formulaic. And so it’s difficult for me to predict today with any certainty where incentive fees would be on. And as you probably know it’s not a binary trigger either. They could be on it partially, or they could be on fully. It just depends on where we are with regards to NAV. It’s possible, there could be some incentive fee earned in the first quarter, if NAV was flat. I wouldn’t expect we’d be in a position to earn an entire incentive fee. And I would think that everything else was equal than probably in the second quarter is when you could start seeing an incentive fee payable.”